There are two species of toad found in Britain, and both these are native. By far the most numerous is the common toad (Bufo bufo). It has a rough, warty skin, generally brown in colour with darker spots. A toad's movements are much slower than a frog's, and it crawls along, sometimes jumping a little, but does not leap as a frog does. A toad is bigger than a frog, growing up to 10cm (4in).

Diet: During the spring and summer, the toad feeds on worms, slugs, snails, other invertebrates, and even young frogs, newts and mice! Like the frog, it catches most of its prey with its long, sticky tongue. In winter, the toad hibernates in a dry place, under logs or stones.

Predators, such as cats, weasels and foxes, usually leave toads alone because they have special poison glands on their back. These glands secrete a nasty-tasting, smelly poison. Some grass snakes will eat toads.

Breeding: After waking up from their winter hibernation, about a month later than frogs, toads set out on a long, often dangerous migration to their breeding ponds. They climb walls and other obstacles, and hundreds are killed by cars as they cross roads. On traditional migration routes, warning signs are sometimes placed on busy roads. Toads like to spawn in fairly deep water. The female lays about 5,000 eggs, not in a large mass as the female frog does, but in a very long double string, entwined among water plants. 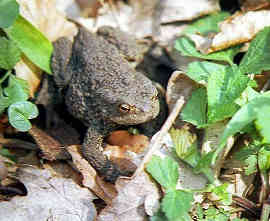 The tadpoles are much darker in colour than frog tadpoles, but they develop in a similar way. They are poisonous to some predators, but even so, only 1 in 20 survives to become adult. It will be three years before the males are ready to breed, and the females are ready a year later.

In the summer when spawning is over, adult common toads live on the land, hiding under logs or stones during the day, but venturing out at night to go hunting. On warmer summer evenings, they may head for a nearby pond for a cooling dip.

The natterjack toad (Bufo calamita) is only found in sandy habitats and was once common in many areas, including the southern heathlands. It is now mainly found in coastal sand dunes in East Anglia and north-west England. Habitat destruction has been the main reason for its decline in numbers and it is protected by law.

The natterjack toad is smaller than its more common cousin and it has a distinctive yellow line down the middle of its back. It also has a smoother, shinier skin, and shorter back legs, which enable it to crawl faster. The toads dig burrows in the sand and use these to shelter in during the day. Although they may come out during the daytime, most of their hunting is done during the night. They feed on insects and other invertebrates.

Breeding: In April, the male natterjack toads begin sitting in the water round the edges of shallow sandy pools and they croak loudly to attract the females. Spawning continues until July and the female lays a long string of eggs - but with only a single row of eggs, not a double one, like the spawn of the common toad. Many tadpoles die before they have managed to develop into toadlets because their shallow pond dries up. Most surviving toadlets are ready to leave the water in June or July. It will be four or five years before they are fully grown. Most predators leave the natterjack toad alone because of its poisonous skin, but crows and seagulls somehow manage to remove the skin and then eat the rest of the toad.