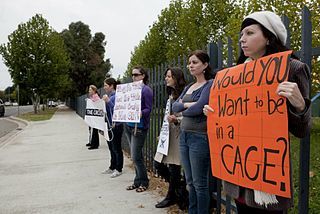 Nowadays, manycircuses do not feature animals in their performances but it used to be very common.  Elephants, lions, zebras and camels would move all around the country in small cages transported on the back of trucks, perform for the crowds and then move on again.  Animal rights campaigners have been protesting about this practice for decades and, in May 2019, the government introduced The Wild Animals in Circuses Bill to ban the use of wild animals in travelling circuses in the UK.

Animals in the circus are made to perform unnatural tricks for entertainment and are kept in conditions very different to their natural habitats.  It can be said that many circus owners and workers care for and love their animals very much, but the question still remains if it is 'right' to use and keep animals in this way for human entertainment.

A very interesting case came up in 2014 about Sandra, an orangutan who had been kept in a zoo in Argentina for 20 years.  Sandra was shy and often hid from the public.  A landmark case was settled in a Buenos Aires court granting her some of the legal rights that we have as humans. The singular case hung on whether the animal was a "thing" or a "person". Here is an excerpt from a BBC article;

She was, they argued, in a situation of illegal deprivation of freedom as a "non-human person.”

Another issue for animal rights campaigners is whether animals such as dogs and horses should be raced for human entertainment. People enjoy watching and gambling on races between animals. Horse racing with jumps is especially contentious as many horses die or break their legs during such races each year. It is very difficult to fix the leg of a racing horse, especially in a way that will allow it to be useful in racing any more, so horses which do break their legs are often shot.  Arguments have also been made against the use of whips and other devices for forcing horses to speed up during races. Some people argue that with certain changes, animal racing could be made more humane, others argue that humans have no right to use animals for their own entertainment at all.