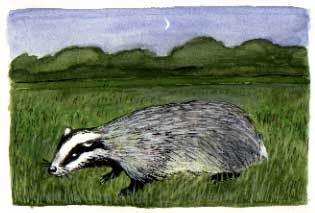 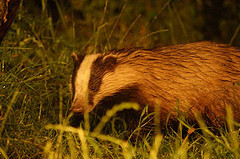 Disease: Although the occasional 'rogue' may develop a liking for poultry, on the whole badgers do more good than harm. However, some people have been at odds with badgers for many decades for a variety of reasons.

In the early 1970s some badgers, mainly in south-west England, were found to be infected with the bacteria that cause tuberculosis (TB) in cattle. The Ministry of Agriculture thought it was likely that badgers could transmit the disease to cattle; as a result thousands of setts were gassed to try and stamp out the disease. Tuberculosis is still affecting cattle in some areas, particularly in the south-west of England and in 2013 there were two pilot badger culls carried out in Somerset and Gloucestershire. According to a report by the Department for Environment, Food and Rural Affairs, the benefits of reducing disease in the Somerset cull area in 2014 are expected to be realised, and it is advised that culling should continue in 2015 and for at least one further year.  The benefits of the cull in Gloucestershire may not be realised but should be continued in 2015 and possibly continued beyond 2017.

The culling of the badgers aims to reduce the disease which has been increasing throughout parts of the UK for many years. The latest information from The Department for Environment Food and Rural Affairs states that the costs of the first year of the two badger culls, including the pilot stage, were £6.3m. Badgers are a protected species and cannot be killed without special permission.

Many animal welfare organisations and animal lovers are against the idea of killing the badgers and scientists say that culling could even make the problem of disease worse not better.

Road traffic: Although both the badger and its sett are protected by law, this does not prevent the death of 40,000 badgers killed by road traffic every year. Badgers follow the same paths all their lives, so if a road is built across their path they will continue to use it. On some new roads where an established badger path is known to exist, special badger tunnels have been built underneath the road.

Illegal sport: An increasing threat to badgers is the illegal, extremely cruel 'sport' of badger-digging and baiting. Despite being made illegal is 1835 and still an offence under the Protection of Animals Act, the practice continues.  Badgers are caught with the help of aggressive dogs, trained and encouraged to fight with the badgers, and kill them as a spectator sport for the badger-baiters. It is estimated that 10,000 badgers a year suffer at the hands of badger-diggers, particularly in Wales and the north of England.

There are more than 70 badger groups around Britain. These groups survey the setts in their area and try to keep an eye on them, looking out for signs of interference. If you suspect that a sett is being disturbed by people, record any vehicle registration numbers and descriptions from a safe distance and contact the police or RSPCA.

Badger groups also co-operate with the Department of Transport who arrange for a tunnel to be constructed if a sett is proved to be in the line of a planned road.

If you would like to find out more about your local badger group, then visit the useful links on the next page.

If you would like to find out more about your local badger group, then visit:
The Badger Trust    http://www.badger.org.uk/Content/Home.asp
The Wildlife Trusts    http://www.wildlifetrusts.org/