The common long-eared bat is the second most common bat in the UK and is a highly agile hunter, using its unusually large ears to listen for prey.

Distribution: Widespread throughout Ireland and Britain, except for Northern Scotland and the Western Isles. Also throughout Europe from the Mediterranean to Scandinavia.

Habitat: Trees and bushes, including in inhabited areas. Can be found in cellars and stables during the winter, and in hollow trees, steeples and lofts in summer. 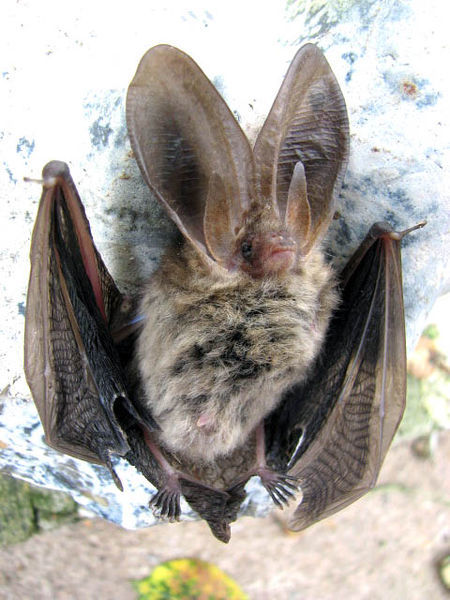 As is suggested by its name, the most noticeable thing about this bat is its ears!  A small bat with buff-coloured body and a paler underside, the common long eared bat has ears that measure 34 to 38 mm long - nearly the same length as the rest of their body. It has long, silky fur, large eyes and slit shaped nostrils. Its wings are thin and translucent.

While they are in flight, the long eared bat keeps its ears fully upright and extended forwards to help it hunt. When the bats are resting, they are able to curl their ears sideways, a little bit like the horns of a ram!  During hibernation, they tuck their ears right down, with only the pointed ear covers showing.

The grey long-eared bat (Plecotus austriacus), which is endangered in the UK, differs from the common long-eared bat, as it is greyer in colour and larger.

The long eared bat is found across the UK (apart from the most mountainous regions of  northern Scotland) and all over Eurasia from Spain, to Japan and India.

In summer time, the long-eared bat can most commonly be found roosting in hollow trees at the edge of gardens, parks or woodlands. They can also be found gathered along the beams of large roof spaces in stables, barns, and old buildings.

The long eared bat hibernates from mid October to early April in caves, mine shafts, hollow trees, and under roofs, where their roosting spots can can often be indicated by stains on the beams. They prefer to hibernate in very cold temperatures, just above freezing. They will also willingly use bat boxes for hibernation and sometimes breeding. 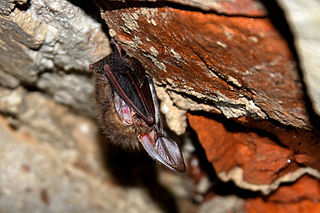 Although they are able to use sonar for echo-location of their prey, the long eared bat relies on this method less than other bats; it is sometimes called the ‘whispering bat’ because it hunts so quietly.  Instead, it used its large ears to listen for the sound of prey rustling leaves and its large eyes to spot the food.

Common long-eared bats emerge from their roosts fairly late in the evening, but are active all night. They fly at a height of 2-7m (occasionally up to 20m), and often glide or hover near foliage, from which they pick off insects. They fly slowly but are very manoeuvrable and can dart at prey when they hear it. They will often follow a route along a hedgerow or along a river to guide them when looking for food.

The grey long eared bat will eat all kinds of invertebrates such as flies, earwigs, beetles and moths. If the prey is small, they will eat it in mid air, but with larger moths, the bat will carry the prey to a perch and eat it whilst hanging upside down!

Long eared bats are mature at 12 - 15 months old. The long eared bat mates in the autumn, but the females are able to delay fertilisation of their eggs until spring.  Females often form colonies in summer, with as many as 30 pregnant females roosting together.

They give birth to a single offspring, or very rarely, twins. Bat pups are born from late June to July and are completely hairless. The have long feet which they use to cling on to their mother’s fur. For the first 3 weeks, they stay with their mothers, feeding on her milk and then they are left alone in the roost while their mother hunts for food. The pups become independent after six weeks and are able to start hunting for themselves.

Like all species of bat in the UK, the long eared bat is protected under the Wildlife and Countryside Act, 1981.  It is also a priority species under the UK Post-2010 Biodiversity Framework and is listed as a European protected species. This means it is against the law to harm long eared bats or to damage their roosting habitats.

Long eared bats are sometimes killed by cats, kestrels and owls and they are also at some risk of habitat loss due to destruction of broad leafed woodland, where they roost and hunt for food. You can help all bats by providing bat boxes for them.  Avoiding the use of insecticides is also a good way to help bats as these can kill off the insects they need to feed on.