Grizzly bears are a North American subspecies of Brown Bear now found wild only in Canada and Alaska and in parks and reserves in Montana, Idaho, Wyoming and Washington. The largest American population is in Yellowstone National Park. 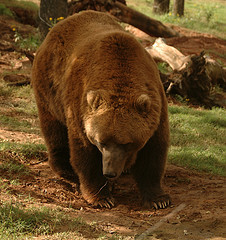 Habit: Solitary, except in mating season.

Weight: Varies From 90-300kg, according to location

Grizzly bears are now found wild only in Canada and Alaska and in parks and reserves in Montana, Idaho, Wyoming and Washington. Largest American population is in Yellowstone National Park. They were once widespread throughout North America, and even as far south as Mexico but they were wiped out by hunting and habitat disturbance. It has been listed as an endangered species since 1975 and is now protected.

The grizzly is a sub-species of the European and Asian brown bear. There are five other closely related species, including black and polar bears.

The grizzly bear has no natural enemies or predators in the wild. It is not really territorial, rarely fighting with other animals and tolerating fellow grizzlies, except during mating season.

Grizzlies spend spring and summer days foraging, resting and sleeping. Heavy feeding goes on in the autumn in order to build up energy reserves for their winter sleep. Grizzlies are not true hibernators, and fall into a torpor (deep sleep) during cold weather, but on sunny days they wake up and go to look for food.

Unlike other bears, grizzlies do not often use natural winter shelters like caves. Instead, they excavate large dens for themselves on a steep, north-facing slope, which will be covered in a thick layer of snow.

Most grizzlies wait for the snows before moving into their dens. Unless there are periods of warm weather, they stay inside until spring. Males and females without cubs generally emerge first, each individual bear usually emerges at slightly different times. When they leave the den, they first need to feed. They will feed near their dens and return to them at night until the weather is milder.

Despite its fearsome reputation, the grizzly is just as happy eating vegetarian food (fruit and berries) as it is eating meat. It is classed as a carnivore, but in fact is more of an omnivore, and will eat pretty much anything. Even its teeth, once those of a typical carnivore, have become modified over the centuries to suit its varied diet.

The grizzly feeds on all kinds of fruit, nuts, seaweed, roots and animal protein including insects, rodents, fish and carrion. It also has a very keen sense of smell and can detect carrion (dead animals) up to 28km away. Grizzlies will kill large animals, such as caribou, choosing one that is young, weakened or wounded. A kill of this size can last a sow and her cubs for four or five days. The mother hides the carcass between sittings so that other scavengers cannot find it. Small animals are not completely safe either, as grizzlies will use their claws to dig out ground squirrels and other small prey. 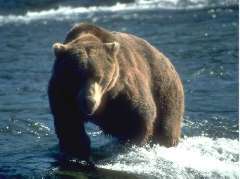 Grizzly bears living near salmon rivers are skilled at fishing. Various 'fishing' methods are used, with each bear developing its own style. Sometimes the grizzly stands close to the bank, flipping the salmon out of the water and on to dry land with its paw, or it may sit quietly on a rock by deep water, waiting for a salmon to swim past. The bear then dives in and pins the fish to the river bed, breaking its back in the process.

Grizzly bears mate during June, the males 'wooing' the females by following them, making low snorts and nibbling their backs and necks.

Gestation takes 180 to 250 days, so birth takes place during the winter when the bear is in her den. Fertilized eggs do not implant in the womb until the autumn, so that the female is able to feed freely and build up fat supplies for her and her cubs.

Cubs are born blind, toothless and almost hairless. They are about 20cm long and weigh between 450 and 700g. They remain in the den with their mother for the first few months and feed on her rich milk, protected from the cold by the warmth of her body.

The cubs leave the den with their mother in April or May. She teaches her cubs to forage and hunt and does not feed them on food which she has gathered. Many young bears die, despite the efforts of their mothers, from attacks by other mature bears. In the first winter after the cubs' birth, they den with their mother. Some young bears also do this in the second year or they may den together.