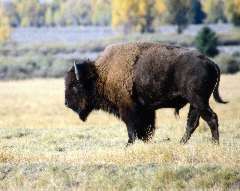 Mature bulls live alone or in small groups, but during the mating season (July to September) they join herds of females and immature males to fight over females which are ready to mate. Each mature female can calve once every two years.

Males fighting over a female will first bellow at each other and stamp their feet. If neither backs down, they charge each other, butting heads until one of them retreats. The victor mates with a female, and stands guard over her for several days to prevent other males from mating with her. The calf, when born weighs about 30kg, and is able to stand and run within a few hours.

The American bison was once one of the most abundant hoofed animals living in the New World. It has been estimated that even in the year 1800, there were probably more than 60 million bison roaming the prairies of North America, feeding entirely on grasses and gradually migrating from north to south as winter approached.

The vast herds were followed by Indian tribes, who for centuries had hunted the bison and to whom the bison had become a basic commodity. The Indians ate the flesh, used the skins for clothes and tepees; the sinews for bindings; the bones for tools and arrowheads; and other parts of the animal for medicinal, magical or decorative purposes. In spite of this, the total number of bison killed by all the hunting tribes put together had little or no effect upon the teeming bison population. The coming of non-native settlers quickly changed all that!

Having established themselves firmly on the eastern side of America, the settlers began to head westward in a quest for land, minerals and wealth or simply because there were new frontiers to conquer. So the great wagon trails rolled toward the west - soon to be followed by the railways, which were needed to carry supplies, goods and passengers to and from the newly won territories with their towns, cities and rapidly increasing populations.

The railways crossed not only Indian land - but bison ranges also, and the herds of bison, often numbering hundreds of thousands, had a nasty and all too frequent habit of trampling across the tracks and completely wrecking whole sections of the line. The railway owners did not react kindly to the costly damage caused by the bison. They decided that this animal would have to go!

The railway organised 'hunter specials' and ran them on a regular excursion basis whenever the bison herds were sure to be close to the line. The trains were packed with hunters who sat at the open windows of their carriages firing wildly into the herds grazing near the tracks.

Sometimes the trains paused for a while so that the hunters could cut out the lolling black tongues from some of the dead bison (the tongue was considered to be a delicacy) or perhaps take the head of a particularly fine specimen as a trophy. For the most part however, the bison were left to rot where they fell, and soon it was possible to spot the path of the railways from quite a long way off thanks to the double bank of decomposing bison remains - one on each side of the tracks. The stench of rotting carcasses was so dreadful that for a time the hunting specials had to be withdrawn during the hotter periods of the year. The less fastidious carrion eating animals gorged themselves sick along the grisly miles of rotting flesh.

In a surprisingly short time the bison herds were completely decimated and the Indian people were faced with hardships previously unknown by the tribes. The settlers became the great enemy of the Indians and it was not long before the settlers found themselves at war with the native Americans.

The slaughter of the bison (or buffalo as it was incorrectly called) continued unabated. The railways now employed special hunters to do their killing for them. One of them 'Buffalo Bill' Cody boasted that he was able to kill hundreds of bison each day.

By 1889 there were just 541 bison left alive in the whole of North America! Humans had succeeded in wiping out nearly 60 million bison in under ninety years! The species was saved from the abyss of extinction by an act of Congress - but only just in time! Since then, careful conservation measures and protection have helped the bison to make a slow, but steady recovery. Even so, there are only about 500,000 bison alive today.  Of these, only about 15,000 are classed as truly 'wild'.  The rest are mainly on ranches, where they are bred for their meat and skins.