The wild boar lives in a family party that has a territory of 10 - 20 sq km but in the autumn, family groups come together to form herds of up to 50 females and youngsters. 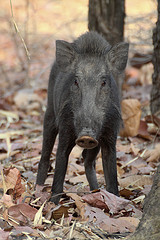 Description: Pale grey to brown or black in colour; thick hide with sparse bristles and some finer hairs. Tusks (enlarged canine teeth) - larger in the male.

Food: Roots, fruits, nuts, fungi, insects, amphibians, reptiles, small mammals, birds, carrion. Domesticated pigs are descended from the wild boar which has passed on many of its characteristics, although it is much slimmer, tougher and more agile than the average farmyard pig!

Territory: the wild boar lives in a family party that has a territory of 10 - 20 sq km but in the autumn, family groups come together to form herds of up to 50 females and youngsters. The group is known as a sounder, led by an older sow, and its members feed, rest and sleep together. The young male forms a bachelor group but the older male remains solitary, joining up with females in the autumn mating season. Once mated, he will once again live alone.

Daily life: a wild boar searches for food mainly at dawn and dusk, rooting amongst the leaf litter and damp soil of open woodlands with its toughened snout. It has a keen sense of smell and will eat almost anything! Its main diet consists of plant material but it will happily gobble up any animals it can catch.

Wild boars like to live near mud wallows - a shallow muddy pool of water. This wallowing is an important routine, helping to remove parasites, keeping them cool in the heat and protecting the sensitive skin from the sun's harmful rays. Domestic pigs like to wallow, if allowed to do so.

A den is used for resting and sleeping. A boar often makes a shelter by cutting long grass and crawling under it to lift it so that it becomes entangled with the tall plants around to form canopies. Wild boars communicate with each other using a wide range of grunts, squeaks and chirrups. They grunt a lot when feeding - a loud grunt is a warning to others.

Domestication: the earliest domestication of the wild boar is uncertain but it probably came about when men settled down and began farming rather than hunting. Wild boars don't like being herded but they readily take to life in a sty or house. It is likely that pigs were domesticated from local races, so producing domestic pigs of various sizes.

The Chinese pig was domesticated by the first neolithic farmers in about 3,000 B.C. and was descended from the wild Sus vittatus, a fatter, shorter-legged type than the European Sus scrofa. The 'Neapolitan' pig from Italy was said to have been of Siamese ancestry and bred from the Asian pig Sus indicus. Both these pigs were crossed and re-crossed with the native European wild boars. The Siamese pig, or 'tonkey' pig, as it was known, was also introduced into Britain in the eighteenth century together with a variety of other foreign types. All these imported pigs were cross-bred with the European wild boar for nearly a century. The Berkshire pig was the first of the fashionable early breeds and was used to cross-breed with local types to produce many regional strains.

The pig has been bred for its flesh (pork) and its fat. Its bristles have been used for making brushes and the hide for all sorts of leather goods. The bones may be ground up for bone meal fertiliser. However, over the centuries, the domestic pig has been put to quite a few other uses. It has been used for sacrifices; in Roman times, among the armies, there was a strange custom of swearing an oath on a pig or a piglet! Pigs have even been used for pulling carts!

In Ancient Egypt pigs were used for treading in corn, their sharp hoofs making holes of the correct depth for the seed to germinate. Perhaps strangest of all, in medieval England they were trained as pointers and retrievers for illegal hunting in areas like the New Forest. This came about because the commoners, living in the New Forest, were forbidden to keep large dogs - they could only keep dogs capable of passing through King Rufus' Stirrup, an iron stirrup 26.3cm high by 11.3cm across.

Wild boars are sexually mature at 18 months of age, but a male will not usually mate until he is about four years old. During the autumn mating season, the male joins a herd of females and fights any male who challenges his position. Fighting boars use their tusks to slash at each other's shoulders. Despite their thick skin and coarse layer of hair on the shoulders, deep wounds are sometimes inflicted. After mating, the boar leaves the herd, taking no part in rearing the young.

After a gestation period of 112 - 115 days a litter of 3 - 12 piglets is born in the spring. The sow prepares for the birth by constructing a nest of grass and the babies are born into this. The mother has 8 - 14 teats and each piglet has its own teat from which to suckle. The first piglets born choose a teat near their mother's head so that they have a better chance of attracting her attention and are less likely to be trodden on. The piglets are born with stripes and these help to camouflage them in the undergrowth. The litter stays in the nest for about 10 days and then the family moves off, joining up with previous litters. The young are suckled for about 12 weeks before they are completely weaned onto food which they find while rooting around with their mother. Their coats become a dull, dun colour at about 6 months and they will stay with their mother until at least the next litter is born. At one year old their coats are a rich black-brown and they reach full size at 5 - 6 years of age.

The wild boar is widespread at the moment, but in Europe it is only found in large areas of forest. It became extinct in Britain during the 17th century, mainly due to hunting and the destruction of its forest habitat. But after hundreds of years they have found their way back into the wild!  There are now said to be 500-1000 wild boars in the UK.

The older breeds of domestic pig were much more common a hundred years ago than they are today and they are now classed as 'rare breeds'. Conservationists are doing their best to protect these, not just for nostalgic reasons but as an insurance against the future deterioration of our modern pigs. The 'rare breeds', with their ability to survive on poorer food and in harsher conditions, can be used in breeding programmes to fight against disease and improve the modern pig breeds.

If you are interested in learning more about visit www.britishwildboar.org.uk