The swallowtail is Britain's largest and most exotic butterfly. Its name refers to the extensions on the hind-wings which look rather like a swallow's tail. 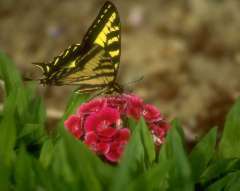 Food: The caterpillar of the swallowtail butterfly prefers to eat the leaves of milk parsley, which is becoming increasingly rare in Britain today. The adult butterfly uses its long proboscis (tongue) to drink nectar from flat-topped flowers such as milk parsley and thistle.

Breeding: Swallowtails mate during the summer months, from late May onwards and the eggs are laid singly on the upper leaves of the milk parsley. They hatch after about two weeks and at first the tiny caterpillars look like bird droppings. When fully grown they become an attractive green with a black and orange stripey pattern. To frighten away predators, the caterpillar can shoot out a pair of orange 'horns' from its head and produce a smell like ripe pineapple!

However, many caterpillars are eaten by birds, spiders and small mammals. By about the end of summer any survivors have changed into a chrysalis (pupa) which can be either green or brown, depending on the colour of its background. It is attached to the milk parsley stem by a silk pad and silk girdle. It usually spends the winter in this state and the adult butterfly emerges from its pupa in late May. Quite a few chrysalises are eaten by predators too.