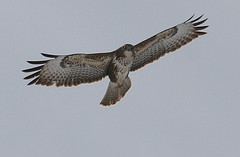 Daily Life: Buzzards hunt during the day and are usually seen on their own, or in pairs. A buzzard spends long periods soaring, holding its straight wings motionless, with the tips of the primary feathers curved upwards and the tail spread out.

Breeding: In the early parts of the breeding season, buzzards perform graceful aerobatics, soaring, tumbling and looping the loop, trying to attract a partner. A pair is often seen gliding in circles around each other; the male glides a little above the female and both face one another. This displays flight indicates that there is a nest nearby. Sometimes the display consists of a series of dives. The bird glides steeply down with half-closed wings and then soars up again, almost vertically, to repeat the glide.