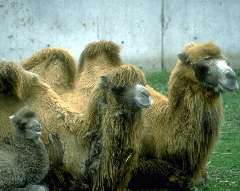 The Bactrian camel takes its name from the ancient land of Bactria that once existed to the north-east of what is now called Iran. 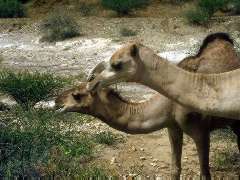 The hump of a camel contains a store of fatty tissue which can be used as a source of food and energy when natural vegetation is in short supply or non-existent. Camels can be bad-tempered animals capable of inflicting a vicious slashing bite. They can also spit a foul smelling 'soup' of regurgitated food at anyone who irritates them sufficiently. Despite all this, the camel can carry a load of around 181k (400lb) over considerable distances, while the dromedary or riding camel can travel up to 100 miles in one days, so it is not really surprising that camels are regarded as valuable working animals.