The cheetah is best known for its reputation as the fastest land animal over short distances - up to 70 mph. 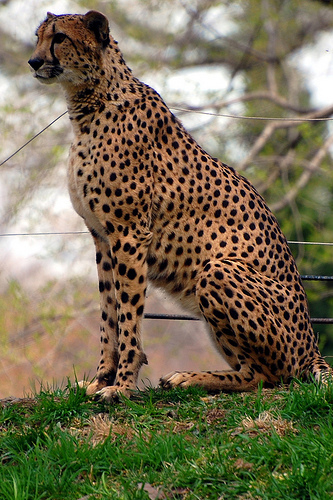 Distribution/Habitat: Cheetahs are found in grassland and semi-desert regions of eastern, central, and southwestern
Africa with small, isolated
numbers in southwest Asia. In the past they were widespread in Asia and the Middle East.

Description: Resembles a lightweight & streamlined leopard, with a long, thin body, long legs, powerful shoulder muscles and a small head. There are distinctive black 'tear-mark' stripes running down each side of the face from eye to mouth.

The cheetah is best known for its reputation as the fastest land animal over short distances - up to 70 mph. Cheetah's body's closely resemble those of the greyhound - another animal built for speed.  In-fact many of its characteristics are more dog-like than cat. Unlike other cats, the cheetah's claws can be only partly retracted, and they are constantly blunted as the animal runs across the ground. Blunt claws help the cheetah to change direction when running at high speed. Even the pads are more like those of a dog - small and tough, with edges that help to grip the ground.

The cheetah's canine teeth are also dog-like. Other large cats have long canines which enable them to easily bring down large prey - and they have more muscle power to seize and hang on to them. However, while it does have these disadvantages, the cheetah has one great advantage over all other cats - that is its ability to run at an amazing speed.

Although the cheetah can reach speeds of around 70 mph, it can only sprint about 300m before running out of steam. So a cheetah tries to creep up to within 50m of its prey before springing into action. It sucks in as much air as possible, arches its back and pulls its feet together. The supple, spring-like spine uncurls and the cheetah throws its legs out to their full extension. As the front legs hit the ground, the spine curls up again, ready to propel the legs forward.

A running cheetah almost seems to be flying, as for about half the time it has all four feet off the ground at the same time. The long tail streams out behind, acting as a rudder to help the cheetah turn. A cheetah sprinting at top speed cannot turn as sharply as a nimble antelope and if the prey manages to turn 3 or 4 times, the cheetah quickly becomes overheated and out of breath. The actual chase at the end of a hunt may last only 20 seconds. The cheetah is a sprinter, not a long-distance runner!

Female cheetahs are usually solitary after separating from their mother and litter-mates, at about 18 months of age. They hunt alone, keeping away from other cheetahs except to mate.

Breeding males are territorial, each one defending an area of 15 to 30 square miles (39 - 78 square kilometres). These areas may be within the females' hunting grounds, but any male intruder is likely to be attacked or even killed, particularly if it crosses the territory of a male coalition i.e. a group of males that live in the same territory, These males are often brothers that have stayed together after separating from their mother at 17 - 23 months. They operate in pairs or trios, and in this way they can hold their territories for a longer time than a single male can. Another advantage of living in coalitions is that they are able to kill larger animals than single hunters.

There are estimated to be only 7,100 cheetahs left in the wild, and their future remains uncertain across their range.

Of all the cats, the cheetah is the most active during the day. It seldom hunts at night and usually rests during the hottest part of the day, often under the shade of a tree. A female with cubs travels about 2 miles in a day, but a male may travel for about 4 miles.

Cheetahs live on medium-sized prey, such as impalas, gazelles, the calves of wildebeest and zebra, even hares and large birds. A cheetah eats about 2.5kg of meat per day. It drinks about once every four to ten days. When lucky enough to catch an animal (few hunts are actually successful), the cheetah brings it down either by tripping it or knocking it off balance with a blow to the hindquarters. Slower prey is pulled down by hooking a sharp dewclaw into the shoulder or flank and dragging backward. Finally, the cat gets a tight grip on the throat and chokes the animal to death. The cheetah usually eats the kill on the spot, or, if it is not too heavy, drags it to the nearest cover. It can eat up to 14 kg of meat at a time. At least 10% of kills are stolen by other carnivores, such as hyenas and lions. Lions kill cheetahs, given the chance, and predators take over half their young in the first 3 months.

Cheetahs can breed all year round. After mating, the male goes off on his own and leaves the female to raise the young, which are born after a gestation of 90 - 95 days. The cubs, which weigh only 150 - 300g at birth, are blind at first and are kept hidden the first month. Their eyes open at 10 days old, and they have long, silky black fur with faint spots and a cape of long, blue-grey hair.