Human and chimpanzee DNA is very similar, they are humans' closest living relative. 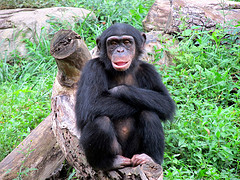 Distribution: Chimpanzees are found in 22 African countries, from the west coast to as far east as Tanzania

The chimpanzee lives in troops of between 25 and 80, each with a dominant male. The home range of each troop varies from 18 to 21 sq km in the forest and 100 to 200 sq km in savannah, more open country. The territories of different troops often overlap one another within these different habitats.

The chimpanzee is active by day, spending the night asleep in a nest which it makes with branches and vines in a tree, well above the ground, safe from predators. The same nest may be used for several nights if the troop is not on the move.

Fruits, including bananas, pawpaws and wild figs, make up the main part of the chimpanzee's diet and about 7 hours a day may be spent feeding, either up trees or on the ground. After an early morning feed, a chimpanzee becomes less active and lounges about, nibbling the odd berry, leaf, bud or flower. Later in the afternoon, there is usually a more intensive feeding session. Although the usual food is fruits, leaves, flowers and roots, crevices in logs are searched for insects, birds nests are robbed of eggs and chicks and small mammals are eaten. Chimpanzees also hunt and eat larger animals such as young bushbucks, bushpigs, colobus monkeys and young baboons. 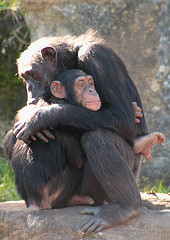 Socialising: Members of a troop spend many hours grooming each other, and themselves. Mothers carefully search the fur of their babies for foreign particles. Dirt, burrs, dried skin and ticks are plucked off and splinters removed by pinching them out with lips or fingers.

When chimpanzees meet up after having been apart, they greet each other in a very human way, by touching each other or even holding hands and kissing! If a dominant male arrives, the other members of his troop rush over to pay their respects to him. Within a troop, the males are arranged in a social order, and usually, the older the male the more dominant he is. The males perform noisy displays to help establish seniority, waving branches or rocks or drumming their feet on tree trunks and the ground. 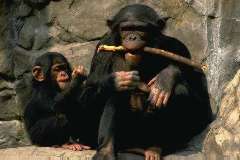 Tool-users: Chimpanzees are the best tool-users apart from humans. They use a variety of tools, the most common is a stick to extract honey, ants or termites from nests. Sticks up to a metre in length are picked off the ground or broken from branches and pushed into nests, then withdrawn, and the insects or honey licked off. Some use a long stick to catch marching soldier ants by wetting the stick with saliva and laying it across the ants' path. When enough ants have stuck to it, the chimpanzee sucks them off.

Stones are used to crack nuts, or as missiles to drive baboons or humans away from food. Another material used for tools is leaves. They are picked, chewed up into a ball and used as a sponge for soaking up water, which is then squeezed into the mouth. Whole leaves are sometimes used for wiping sticky mouths and hands after eating fruit.

Chimpanzees breed all year round, whenever one of the females in the troop comes into season. Female chimpanzees have menstrual cycles very like humans and come into oestrus every 36 days, unless they are pregnant. They give birth about every three-four years, after a gestation period (time between fertilisation of the egg and birth of the baby) of 8 months. A female may be mated by all the males in a troop, regardless of their social standing, who show no sign of competition between themselves.

Usually only one baby is born - twins are rare. If it is the female's first baby, she often appears not to know quite what to do with it! However, by a combination of instinct, watching more experienced mothers with their babies, and learning, she soon starts to care for it. For the first 5 months of its life the baby chimpanzee is carried everywhere by its mother, and clings tightly to her fur. It begins to walk at about 6 months and weighs 9kg at a year old. The baby is dependent on its mother for at least two years, sometimes still riding on her back for periods at 4 years old. By this time, the mother will have another baby and the elder one has to fend for itself. It spends much if its time with chimpanzees of its own age and for the next 4 or 5 years learns where the best feeding places are and how to behave as a senior member of its troop.

The chimpanzee resembles humans more closely than any other animal. It shows human qualities such as facial expressions, problem-solving abilities and a high level of parental care. The chimpanzee even suffers from human diseases such as malaria. Since sequencing human and chimpanzee DNA, there have been calls to reclassify Chimpanzees as 'homo troglodytes' - in the same species as 'homo sapiens', the human being.

Chimpanzees once competed with humans for food crops and were soon driven away from areas with large human populations. Even today, chimpanzees are regarded as a nuisance when they attack banana plantations.

However, for years the chimpanzee has been well-loved - it is probably one of the most popular animals in the world, perhaps because it resembles us so closely. Despite such popularity, the chimpanzee's survival is most threatened by humans. Hunting and trapping chimpanzees for zoos and experimental use is still big business in several parts of Africa - and, as a result, they are endangered in some areas. Chimpanzees have been used extensively for testing drugs because of their similarity to humans, and although this is still going on, the practice is decreasing under pressure of public opinion.