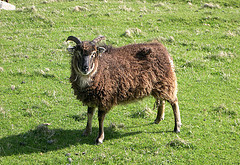 It's not known exactly why plants and animals start growing less, but there are a few ideas.  The earth's climate is getting warmer and in many areas this means there is less rain.  For many plants a great way of dealing with this is to down-size, but this will affect the animals that eat the plant - they will have to eat more to get the energy they need and this may cause the animals to shrink, which will mean a smaller meal for carnivorous animals as well!  Shrinking may be helpful because the smaller you are the less food and less water you need to survive.  But how small can animals go?  Researchers looked back at 65 million year old fossils and noticed the same change in insects such as beetles, bees and ants that became 50-75% smaller as the earth heated up.  This doesn't mean that we'll soon need magnifying glasses to feed our hamsters - the changes are likely to be slow and we may not always notice.