Smell is probably the most common basic means of animal communication with even the most primitive animals reacting to odours given off by their own or other species.

Animals may use scents to proclaim their readiness to mate, to mark out territorial boundaries, to warn off intruders and predators or, in some cases, to attract prey. The most basic substance for these purposes is strong smelling urine, but there are other and more refined methods of producing lingering odours. These take the form of scent glands which may be situated in the hooves, on the face or close to the anus or scrotum.

Communication by scent can prove dangerous to certain animals such as the musk deer and certain civets. Their scent is so strong and persistent that their glands are highly prized by the makers of perfumes who use it as a stabiliser.

Bees, wasps, ants, moths and other insects rely largely upon pheromones as a means of communication. Pheromones are chemical substances which may be secreted in urine, dung or produced by special glands. They are usually given off by the female of the species to attract males. For instance, the antennae of some male moths are so sensitive that they can detect the presence of a female at a distance of more than two miles!
Sharks have a particularly efficient sense of smell and some species can detect drops of blood in the ocean at a range of about one mile.

Snakes have the most unusual means of detecting scents. They use their tongue to pick up scent particles in the air. Having flicked out its tongue the snake then returns it to a special organ in the roof of the mouth which analyses the scents collected.

Dung is another readily available source of scent used by many animals to mark their territory, with some species accumulating and regularly adding to large heaps of droppings which act as territorial marker posts. The rabbit, vicuna, West African civet and hippopotamus are just four examples of these.  Male hippos will mark their with their dung by using their tail as a kind of muck-spreader! 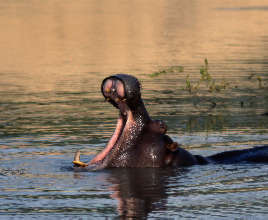 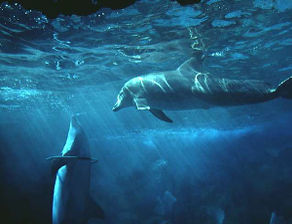 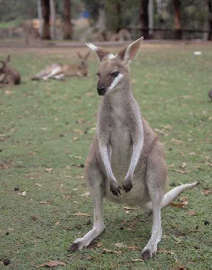 Visual signals may take the form of gestures and display, facial grimaces, body posture or mimicry. The extravagant display of the peacock or lyre bird can make the strutting of a wood pigeon seem ineffective and yet each species has its own way of using visual communication to the best advantage.

The male rabbit will use the white underside of its tail to attract the attention of a female, while the female may use the white of her tail as a visual signal for her young to follow when she is leading them to the safety of the burrow.

Dogs and wolves make use of body language, as do cats, monkeys and many other animals. The attitude of the tail when two wolves meet will indicate which of the two is the superior. The tail held between the legs is a submissive gesture while the tail raised confidently aloft donates dominance. Horses will hold their ears or tail in certain positions to signal pleasure or alarm. Dogs wag their tails as a sign of pleasure while the waving tail of a cat signals irritation or anger.  Raised hackles in the dog family help to make the individual appear bigger when facing a possible adversary.

Apes and monkeys make considerable use of facial grimaces in order to express their feelings. The frown of a rhesus monkey is a clear sign of unease, whereas the raised eyebrow and fluttering eyelid denotes friendship or pleasure.

At another level animals may communicate a simple message through the art of mimicry. The roundels on the wings of the peacock butterfly look like large and scary eyes to a potential predator. The harmless hoverfly resembles the wasp. Many caterpillars through their colouration take on the appearance of poisonous or evil-tasting creatures in order to deter their enemies.

With a little luck and a great deal of patience it is possible to observe and recognise visual communication among animals such as birds or insects in the garden.  Observing the visual signals given by domestic animals like dogs or cats in the home will over time give you a good understanding of their feelings and mood. 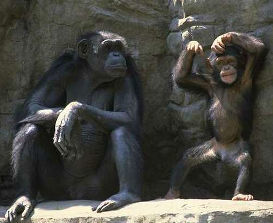 Although perhaps not as important or widespread as sound, scent or sight, a number of animals make use of touch in order to communicate their feelings to others of their kind.

Humans may shake hands, kiss or hug when meeting as a sign of respect or affection.

Big cats tend to nuzzle each other, as do rhinos and many other animals. Elephants too use touch as a means of close communication - interlinking trunks.

There are of course huge numbers of other examples of how animals communicate with each other and we cannot cover them all.  However, we hope that you may be inspired to find out even more, or perhaps to start observing your pets or even wild animals to see how they interact and communicate with one another.  Who knows, maybe one day you will be an expert in the topic!