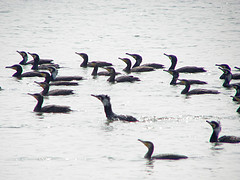 Cormorants are often seen perching on a rock or jetty with their wings outstretched. It is often assumed that a bird in this posture is drying its wings because they are not well waterproofed. However, this would be surprising in a bird which spends so much time in the water and it can be seen holding its wings open in the pouring rain! A more likely explanation for this habit is that it keeps a group of birds spaced out. When a bird lands, it extends its wings so that the birds nearby shift away; when it folds its wings the line of birds is well-spaced with a wingspan between each one. Being spaced out is also an advantage when taking off in a hurry.