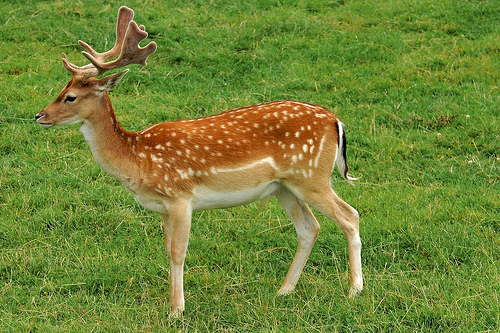 Distribution: Native to the Mediterranean region & parts of the Middle East. Introduced widely in Europe, and to parts of North & South America, southern Africa & Australasia.

Female: smaller than male, no antlers but same coat colour. In winter, the coat has no spots & is dark grey. In some regions there are deer which are pale brown with spots (menil) as well as both black & white varieties.

The fallow deer was introduced into Britain by the Normans and wild herds have lived for centuries in ancient forests such as the New Forest, Epping Forest & the Forest of Dean. Later, semi-domesticated herds were introduced into the parks of stately homes and estates - one of the best-known places to see large herds of fallow deer is Richmond Park in London.

Fallow deer have been widely introduced around the world for both food and sport. They were a favourite quarry of medieval huntsmen, who stalked them in the forests of Britain. Later on they became popular as animals to grace the grounds of stately homes. They are adaptable animals and those that escape from parks quickly establish feral (domesticated animal that returns to the wild) herds. Since humans are now the deer's only main predator in Britain, (foxes sometimes take young fawns), the numbers of deer, especially in parks, have to be regularly culled (selectively killed) to prevent overcrowding, disease and destruction of their habitat and in 2020, when you type fallow deer into a search engine, the top 5 links are advertising deer hunting.

Although the fallow deer is common, and increasing in some areas, in Britain, it is less common than it used to be in its original native range - southern Europe, Iran and Asia Minor. 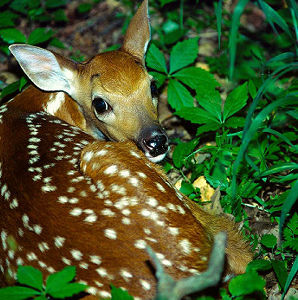