The red deer is Britain's largest land mammal. Although native to Britain, it is also found in southern Scandinavia, Turkey and as far as China and Mongolia. 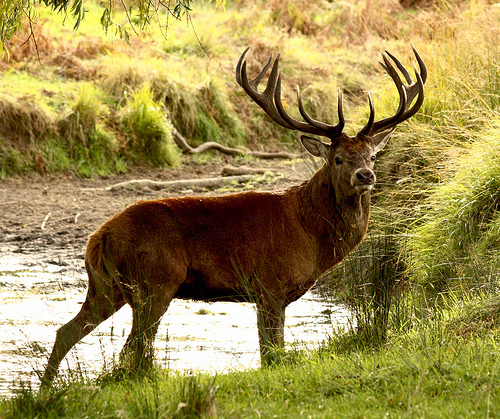 Distribution: in Britain it is mainly present in Scotland and the Scottish Islands, the Lake District, Exmoor, Quantock Hills, New Forest, & Thetford Forest.

The red deer is Britain's largest land mammal. Although native to Britain, it is also found in southern Scandinavia, Turkey and as far as China and Mongolia. It has been introduced to Argentina, Australia and New Zealand. 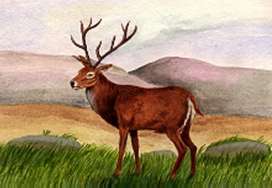 Territory: Stags and hinds live in separate herds for most of the year, each keeping to a well-defined territory. Deer in woodland live in small groups but highland deer usually live in larger herds, moving up the hillsides by day to feed and shelter in the deeper heather or woods at night. Summer and winter territories are different. In winter the herds move to lower ground where there is more shelter, and in summer they keep to the higher slopes.

The natural habitat of the red deer is forest, but as the great forests of Britain were felled over the centuries, most of them were forced to live on exposed moorland, moving into wooded plantations during severe winter weather. 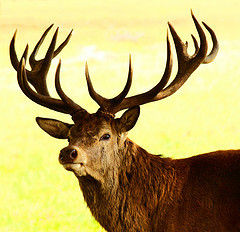 A young stag's first antlers are normally small spikes and at this stage he is known as a 'knobber'. Stags over two years old begin to grow branching antlers and more points or 'tines' are added each time a new set of antlers is grown, until there are twelve points, the head of antlers then being a 'royal'. Antlers are made of solid bone and as soon as they are shed, usually in March or April, a skin (called velvet) grows over the bony stump; this is richly supplied with blood vessels and nerves and bone is laid down within it. When the antlers have reached full size the blood supply to the velvet is cut off. The velvet begins to die and the stag rubs it off against branches and young trees, and eats it.

The size of the antlers is related to the quality of the diet of the stag. Those living in forests have larger antlers than those grazing on moorland. If some minerals or vitamins are lacking then the antlers may be stunted. Stags in the Highlands chew their old antlers when they drop off to replace the minerals needed to grow a new set, which are missing from the peaty soil of their habitat.

The red deer has always been hunted by humans for its meat, known as venison, and for sport. In Roman times, coaches were pulled by teams of red deer during ceremonial processions connected with the worship of Diana, the goddess of hunting.

Today, humans are the adult deer's only predator. Calves are sometimes taken by carnivores such as foxes, Scottish wild cats and golden eagles, but the wolf, which may well have once been the red deer's main predator, became extinct in Britain during the 18th Century.

Most British herds are managed by keepers and herds have to be culled (selectively killed) each year, so that their numbers do not outgrow the food supply. Culling also removes the sick, weak and old individuals so that the herd is made up of strong and healthy animals. The venison is usually sold to help to pay for the upkeep of the herd.

The red deer is quite common in suitable habitats and even increasing. It is protected both as a game animal for hunting and as an ornamental animal in parks. Red deer farming is becoming increasingly popular, the animals being raised in a similar way to cattle.

The deer are browsers by nature, pulling off leaves from oak, birch and rowan trees. They will also eat twigs, ivy and lichen from trees, especially during the winter. In open habitats, the deer become mainly grazers, cropping grass and browsing from small shrubs such as heather. Feeding takes place mainly during the early morning and evening, the deer resting and ruminating (chewing the cud) by day.  Red deer, like all ruminants, have a four chambered stomach to help digest their food.

From about mid-September until the end of October, the 'rutting' season takes place, when the herds split up and the mature stags try to collect a harem of hinds together. A stag of about five years old is in his prime at the start of the rut, with fully developed antlers, a thick neck with a heavy mane and plenty of fat reserves.

A stag will go to a peaty bog or muddy pool to wallow, covering its body with mud which helps to spread its strong rutting scent all over the body. Rutting stags also roar at each other - a deep bellowing sound - challenging each other. Two rival stags may sometimes walk slowly beside each other, a little apart, assessing each other's strength. The weaker one may walk away but if they seem to be evenly matched then they may begin to fight. They may clash their foreheads or just spar with their antlers. The stags may become injured during a fight but they rarely kill each other. On rare occasions the antlers of fighting stags become entangled so they cannot unlock them and they both starve to death.

The most successful stags manage to collect up to forty hinds in their harems and they spend most of their time endlessly patrolling a circle of ground around the hinds, chasing away any challengers, trying to prevent the hinds from straying and mating with each one as she becomes receptive. They hardly have any time to eat, and by the end of the rut, the stags are thin and exhausted.

The gestation period of the Red Deer is 225 - 270 days and the hind gives birth to a single calf (rarely two) in May to mid June. A hind about to give birth leaves her herd and finds a secluded spot, perhaps among bracken, to drop her calf. A young calf is brown with white spots and is well-camouflaged against a background of vegetation. It can get to its feet within a few minutes, can suckle ten minutes later and is able to run after a few hours. During the first few days of life, the calf is left hidden in the undergrowth when the hind is away feeding. After three or four weeks, the calf will follow the same routine as the adults. A calf is weaned at 8 - 10 months but stays with its mother until she gives birth again. Young stags stay with the hind herds until about three years of age.