There is evidence that deserts have existed for million of years on this planet. They do, however, seem to shift and change quickly in terms of geological time. Six and a half million years ago, the Mediterranean Sea was a desert. It had a series of salty lakes and was dotted with isolated volcanoes, which today have formed islands such as Corsica and Sardinia. Around 5.3 million years ago, the Atlantic Ocean flooded through the Straits of Gibraltar and flooded the Mediterranean, leaving it as we know it today.

Many ancient civilizations once flourished around the coast and on the islands of the Mediterranean, yet now many of these lands are deserts. Why are these lands now deserts, and why are we able to create, in a matter of a few years, deserts that take nature years to form? The story is a complicated one and begins with civilisation. Civilisation has always been about exploiting the Earth's resources to produce a better standard of living. One example of this exploitation is the Cedar of Lebanon. In biblical times, huge forests of these trees were found in Lebanon. The trees were felled and traded for grain and oil.

During the first four centuries AD, the Romans ruled much of North Africa, which supplied most of the grain for the Empire. Then the crops began to fail as the fragile soils were overploughed and overcultivated. Trees had been cleared to provide more land for cultivation, yet these trees were vital for regulating the amount of water in the soil, and also prevented soils from being blown or washed away. The soils which were washed away by the rain ended up as silt in the sea. The Romans were unable to stop the silt from filling their harbours, so within a few years their bustling, prosperous trading ports became ghost towns, with the sea moving ever further away as the continued deposition of silt led to the constant retreat of the sea. Ephesus, once a great port on the coast of Turkey is now three miles inland.

Today, the same things are happening, but as we have become more civilised, we have become much better at creating deserts. Around a quarter of the South American rainforest has already been cut or burned down in order to make land available for cultivation. The rainforest soils are very fragile though, and need the trees to hold them together. Once they are removed, the soil can be washed away very quickly. Moreover, rainforest soils are not very fertile. Within a few years of use, all the nutrients in the soil are used up, meaning that crops can no longer be grown.

The soil is little better for keeping cattle. Forest soil produces 22 kilos of beef per hectare, as opposed to 270 kilos of beef on a European farm. The long term effects of deforestation are being ignored by governments, farmers and corporations looking to make a profit out of the first few years of land use. What makes this destruction even more pointless is the fact that a properly managed area of Brazilian rainforest can produce ten times more food than land that has been claimed for use as a cattle ranch. 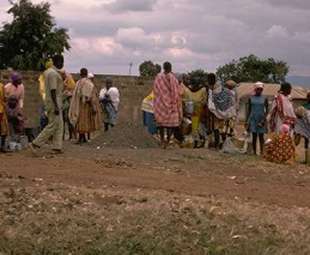 The Sahel, a huge strip of land along the southern edge of the Sahara desert is gradually becoming hotter and drier. The Sahel has suffered greatly from human overexploitation.

Trees have been cleared the land has been grazed, overcultivated and because of improved healthcare it is now overpopulated. With the steady decline in annual rainfall people who were previously able to prosper in this area are now in danger of starvation.