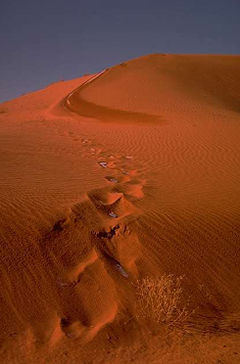 The United Nations Environment Programme has estimated that 4.5 billion dollars will need to be spent every year for the next twenty years to prevent the process of desertification. It was not possible to reverse desertification in the twentieth century, but it should be possible to do so in this century, if the peoples of the world are prepared to unite and fight against the encroaching deserts.

The fight will have to begin facing the conflict between cash and crops. Many of the countries which are suffering from desertification are poor. This means that their governments are keen to exploit the soil to grow crops which they can sell to richer countries. With the foreign currency they are able to buy machinery that they cannot produce themselves.

The problem with this strategy is that more and more land gets used for cash crops, meaning that forests are destroyed to make way for more cultivation. Forest soils are often unsuitable for growing crops, and so turn into desert within a few years. Also, as more cash crops are grown, less land is used to grow crops to feed the people who live there. The balance needs to be changed so that less crops are grown for cash.

There is also pressure to grow crops on the same land, year after year. Chemical sprays used on the soil may keep yields high, but they do so in a totally unnatural way. Without rest, soils become dusty, and will start to blow away. They need organic matter such as manure to maintain their richness, and this is not provided by chemical sprays.

There is now a growing interest in a more natural, organic, method of growing our food. More and more people are demanding food - meat, vegetables and fruit - which is not contaminated with potentially dangerous chemicals or grown with artificial fertilisers.

You may well feel that you can do little to help fight desertification, but you have already taken the first step. You can't solve a problem until you know it exists, so by reading this fact sheet, you have become one of an increasing number of people who are aware that a great deal of our soil is under threat. Now that you know that desertification is happening, try to find out more about it, and about what needs to be done to prevent it.