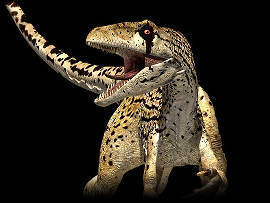 These Are The Dinosaurs That Didn't Die, Victoria Jaggard, (May 2018) For National Geographic. Available here: https://www.nationalgeographic.com/magazine/2018/05/dinosaurs-survivors-birds-fossils/ [Accessed 19/11/20]

Many prehistoric reptiles are referred to as 'dinosaurs' by mistake.

Dinosaurs were a type of reptile known as archosaurs ('ruling reptiles') which included the dinosaurs and the flying reptiles, pterosaurs.

Dinosaurs had a special stance, or way of walking. Their back legs were positioned underneath (perpendicular to) their bodies, instead of sprawling out at the sides, like other reptiles. This gave the an upright stance and allowed them to use far less energy to move than other reptiles (such as crocodiles).

The dinosaurs ('terrible reptiles') were divided into two main orders, the Saurischia of which some were herbivores and others carnivores, and the Ornithischia which, as far as we know, were all herbivores. The chief difference in structure between the two kinds of dinosaurs was in the pelvis. Saurischians are often referred to as 'lizard-hipped' reptiles and the Ornithischians as 'bird-hipped'.

Dinosaurs also had two holes behind their eye sockets. They had strong jaw muscles that went through the holes to attach directly to the top of their skull. This meant that their jaws were able to open very wide and could bite down with extra force.

Dinosaurs lived on land, not in the sea. Marine reptiles, such as ichthyosaurs, plesiosaurs and mosasaurs are not dinosaurs.

Most people are familiar with the story of the asteroid which killed off the majority of the dinosaurs when it hit the earth in the late Cretaceous period. However, not all of the dinosaurs were wiped out and, through millions of years of evolution, they have been transformed: into the birds that we see all around the world today.

Archaeopteryx, a 150-million-year-old animal, is the oldest known link between dinosaurs and the birds we know nowadays. Although it had a mouth full of sharp teeth, it also had feathers on its wings and a wishbone that would be familiar to anyone who has ever eaten a roast chicken!  In 1996 scientists discovered the first known fossil of a feathered dinosaur unrelated to birds,  Sinosauropteryx prima, which was found to date back 130 million years. In 2005, bones from Antarctica were found that were dated to before the asteroid is known to have hit Earth. These fossilised remains of the Vegavis iaai can be dated back to around 67 million years ago and they look strikingly similar to those of modern day ducks and geese.

“There is no doubt that birds are dinosaurs,” says Luis Chiappe, director of the Dinosaur Institute at the Natural History Museum of Los Angeles County. “The evidence is so overwhelming, I would put it next to whether you’re going to question if humans are primates.”