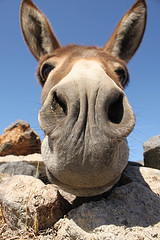 Donkeys are related to horses and zebras. They are all members of the family ‘equus’, i.e. they are equines. The donkey is a descendant of the African wild ass, which is now rare in the wild and found in only a few remote parts of north-eastern Africa. 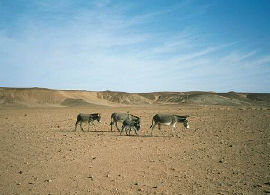 Donkeys range in size from the Miniature Mediterranean (under 91cm) to larger donkeys such as the rare French Poitou (up to 150cm) with its large head and ears and thick, shaggy coat. Domestic donkeys tend to be classified by their size rather than breed as over the generations breeds have been crossed and as a result, there are not many pure breeds left. 'Hands' are a measuring unit used for equines that is equal to four inches.

The size categories are:

Although many donkeys are the familiar grey-dun (mouse grey) colour, there are many other coat shades – there are spotted donkeys, black, white, every shade of grey and brown and albino-white. They can also be of a pink colour (light red mixed with grey-dun), more technically known as ‘strawberry roan’.

Donkeys often live for twenty-five years or more. Some have been recorded as living to the ripe old age of sixty, although a forty-year-old donkey is considered to be elderly.

People keep donkeys for a wide range of reasons.

Some are used to protect herds of cattle or goats. Once a donkey has bonded with a herd it will protect them against canine predators (foxes, dogs, coyote) as it would one of its own. It beds down with the animals at night and on hearing any strange noises will voice a warning to the herd and chase, often trampling, the predator.

Donkeys are also often kept as stable companions for horses. The donkey seems to have a calming effect on horses. It can be introduced to a mare and foal and on separation from its mother the foal looks to the donkey for support. In a similar way a donkey can be an excellent field or stable companion to a nervous horse.

The donkey is also widely used in assisted riding and learning programmes, especially for the disabled, due to its affectionate and kind, patient nature.

There are very few working donkeys in Britain today, however, in many developing countries a donkey is a person’s most prized possession being used to pull loads and carts and to work mills and wells.