The golden eagle is one of the largest and most impressive of British birds, especially when seen soaring over a Highland glen or searching for prey over a hillside, with deep leisurely wingbeats. 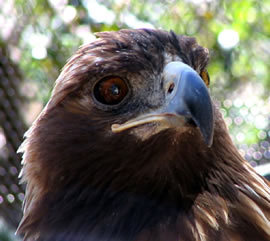 Description: Dark brown on back & wings; head has a golden tinge. Hooked bill.

The golden eagle is one of the largest and most impressive of British birds, especially when seen soaring over a Highland glen or searching for prey over a hillside, with deep leisurely wingbeats. Often it can be seen from up to a mile away, and the impression always is of sheer size, power and majesty. The inexperienced may often confuse it in flight with a buzzard, but its long wings, relatively long tail and obvious head is enough to show it is an eagle. Once an eagle has been seen, there is never any doubt again.

Threats to the Golden Eagle

Over the years the golden eagle has suffered a great deal at the hands of humans. In the nineteenth century, many eagles were killed by farmers and gamekeepers in the belief that they killed large numbers of sheep and grouse. A few lambs may be killed, but mostly weak and sick ones whose chances of survival are already slim. The largest number of lambs that eagles take are ones that are already dead; these may be carried back to the nest to be fed to the chicks, and as there is a lot of wool on a lamb, quite a pile of wool may gather around the nest. It may have been this that gave the idea that many lambs were killed.

Golden eagles certainly do kill grouse, but research has shown that they do not eat nearly as many as gamekeepers used to suggest, and they do not have any damaging effects on the 'bags' at grouse shoots. Fortunately, most farmers and gamekeepers now realise that the eagle may be beneficial in controlling animals that are vermin, such as rats and rabbits; it is an important predator, helping to maintain an ecological balance within its habitat.

Ecological research shows that predators at the top of the food chain have an enormous effect on the biodiversity and ecology of an area - like ripples in water, the presence of our larger predatory animals sustains an incredible amount of life below it's top spot at the food chain.  This phenomenon, in ecological terms, is known as a trophic cascade.

Although the golden eagle is a protected species, it is still threatened by various factors. A few eagles are killed when they eat poisoned sheep carcasses put out to kill foxes. A serious threat is habitat destruction when forestry plantations take over the open areas over which the eagle likes to hunt.

Some pairs of eagles fail to breed or successfully rear their young when they are unintentionally disturbed by too many walkers or climbers passing close to their nests, especially in the Cairngorms area and Central Highlands. It is important, therefore, to control the development of tourism.

The collection of eggs, or eaglets, is still a serious threat too. There are laws, with fines, to stop this, but it is almost impossible to keep a constant watch on all nests in such remote areas.

During the 1960s many golden eagles, as well as most other birds of prey, were affected by pollution from dangerous chemicals, such as DDT, which entered the food chains in their habitat. The eagles, being at the top of the food chains, were taking in considerable quantities of the chemical from their prey; this either made them infertile or caused their egg shells to be so thin that they broke when the birds tried to incubate them. Another chemical, dieldrin, used as a sheep dip to kill ticks and fleas, had the same effect when the eagles fed on dead sheep. Fortunately, when the danger of these pesticides was realised, they were banned and since then the eagle has recovered in numbers to some extent. In 2014 there were 440 pairs of Golden Eagles in the UK.

The golden eagle usually builds its nest, or eyrie, high up on a rocky crag up to 610m (2,000ft) above sea-level, although some eagles nest in trees. Within a territory, a pair may have two or three nests and use them in rotation. The nests are bulky piles of sticks, bracken and heather, lined with grasses.

The female lays two white, blotchy eggs, the first being laid in mid-March; she starts incubating the egg and then lays a second one three or four days later. Both eggs usually hatch but the youngest chick, born a few days after the first, either starves or is pushed out of the nest by the older chick - or even eaten by it! The surviving chick is ready to fly in 65 - 70 days.

Each pair of eagles needs a huge territory of around 3,000 acres and they soar on thermals as they hunt their prey from the air. Once an eagle spots prey, it swoops down at a speed of up to 150 km/h, striking and killing it with its fiercesome talons. Keen eyesight allows the eagle to see prey as small as a mouse or a lizard, but animals as big as a fox may be killed. Normally, larger mammals such as deer are eaten if the eagle finds them as carrion (i.e. dead). Most of the prey is killed on the ground, but some birds are caught in flight.