Distribution: Africa south of the Sahara. They are divided into two sub-species - the savannah/bush (Loxodonta africana) and forest elephants (Loxodonta cyclotis).

Size: It is the largest land mammal.

Gestation: 22 months giving birth every 2 - 4 years.  This is the longest known gestational period of any animal.  The elephant foetus stays inside the womb for almost two years to allow its big brain to grow and mature, enabling it to use its dexterous trunk, recognise the complex social structure of the herd and stand up within half an hour of being born.

Speed: The fastest elephants can charge at speeds of up to 40km/hr. (25 mph).

Their trunk is actually an extension of their upper lip and nose breathing through two nostrils at the end of it.  It contains 100,000 muscles and no bones and they can use it to such delicacy to be able to pick a blade of grass.  With it they can suck up 3 gallons of water in one go and spray it over themselves to keep cool.

They are herbivores eating fruits, grasses, bark and roots.  They need to eat 136 kg a day. Their large thin ears, shaped a little like the continent of Africa, act as large radiators allow excess heat to escape.

African elephants move around in herds of females or “cows” with their calves.  Adult male “bulls”only join them during the mating season. They continue to grow throughout their lives which means that the biggest elephant in a herd is usually the oldest.  Their tusks are really extended teeth which also continue to grow.  During their lives they may have 6 sets of teeth but by the time they are 40 - 60 they don’t grow any new ones and so it is not uncommon for them to starve to death.  Indeed an “elephant graveyard” could be such a place where elephants go to look for softer vegetation to eat.  They use their tusks for a number of purposes such as digging up tree roots and stripping bark off trees to eat and digging holes to reach underground water sources.

African elephants are very important to the eco-system in which they live.  In fact the role they play is so important that they are known as a “keystone” species on which numerous other species rely.  Some plants need to be digested by an elephant before the seeds will germinate, including up to a third of tree species in their habitat.

Their large size and taste for roots leads to pathways through forests being cleared.  This allows sunlight into an otherwise dense and dark forest giving the opportunity for a wider variety of flora to grow which in turn encourages a wider variety of fauna.  These pathways act as natural firebreaks.  Some of the ancient ones are so well established that they have been turned into roads!

Unlike their cousins the Asian elephant, African elephants aren't easily domesticated.  In 2016, experts estimated that Africa's elephant population had dropped by 111,000 elephants in the span of a decade. Today, there are just 415,000 elephants across Africa, which is down from 1.3 million in the 1970s, mainly due to poaching for ivory during the 1980s.

In 1989 there was an international ban on ivory although it is still sold illegally to markets in Africa and Asia.  Although the overall number of elephants in Africa has declined, certain populations are doing so well that they have had to be culled in order to maintain the habitat where they live. Scientists are now considering contraceptives to control their numbers.

In many areas human settlements and crops have restricted the areas within which they can move.  This can bring them into conflict with humans, especially if they trample on their crops.  The Massai people, however, live in harmony with them since their staple food is cows which they keep out in the open. 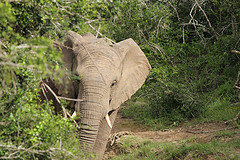