Elephants are good swimmers despite their size, and use their trunks as snorkels. They love water and bathe frequently. 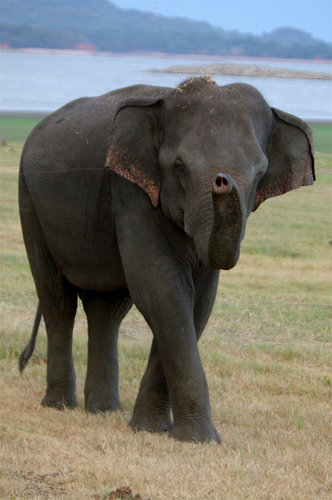 Population: The surviving population of Asian elephants is estimated between 30,000–50,000.

Habitat: Mainly jungle - near a good supply of water.

Gestation: 22 months. This is the longest known gestational period of any animal.  The elephant foetus stays inside the womb for almost two years to allow its big brain to grow and mature, enabling it to use its dexterous trunk, recognise the complex social structure of the herd and stand up within half an hour of being born.

Number of young: Normally one

Asian elephants need a large feeding range, as each animal can eat about 150 kg of food a day. They are mainly browsers rather than grazers, and use their trunk to pick off leaves, fruits and new shoots from trees. Soft bark is torn off young trees using the tusks, and is then put into the mouth with the trunk. The trunk is very important to an elephant, and if it is damaged, the animal is likely to starve to death. The trunk is used to suck up large amounts of water, and to squirt it into the elephant's mouth.

Asian elephants are able to travel great distances to find food and water. They have large territories and often follow the same paths from one feeding area to another over several generations. This means that large 'elephant roads' can be seen through even dense jungle areas.

The rutting (or mating) season usually occurs during periods of high rainfall, as females come in heat in the second half of the rainy season. During the mating season, bull (male) elephants produce large amounts of a hormone known as 'musth', which makes them more aggressive as well as sexually active.

New calves are born 22 months after mating - in time for the beginning of a rainy season, when there is plenty of food available. An expectant mother is often given protection by a second cow elephant during birth and for a while afterwards, because elephant calves are sometimes attacked by lions, tigers and hyenas.

A new born Asian elephant weighs about 100kg, and grows rapidly for the first few years. They continue to grow throughout their lives, though after 15 years, the growth rate slows. Bull elephants have a further growth spurt between 20 and 30 years.  The largest animal in a group of elephants is usually the oldest.  Elephants are able to regulate their population without interference from humans. If habitat is lost, they are able to reach puberty later, and extend the period between births.

Elephants are able to move very quietly and barely leave tracks on firm ground. In wooded areas, elephants can lose sight of each other, so they emit rumbling purrs in order to keep in touch. Some of the sounds made by elephants can be heard by other elephants from over 19km away.

Females live together in close family groups of mothers, sisters and daughters. Female calves stay with their group, but male calves join bachelor herds, and when they reach sexual maturity, live mainly alone, though they do sometimes live in small, temporary groups.

Elephants are good swimmers despite their size, and use their trunks as snorkels. They love water and bathe frequently.

Thousands of Asian elephants are domesticated, despite their endangered status in the wild.  They have been used by humans for centuries as religious symbols, for transport, as working animals, and even as fighting platforms in warfare. The Asian elephant is vital for forestry work and is used to transport logs and fell trees.  In India they are used for patrolling areas to protect other species from poaching, especially during the monsoon season when areas would otherwise be inaccessible. Hindus value the elephant very highly and it is important for a number of religious ceremonies.  Captive elephants in distress have been known to weep, just like humans, though generally captive elephants are well treated by their owners because they are so highly prized.

Despite their endangered status in the world, there are many domesticated elephants in Asia and they are particularly common in India and Thailand.  Unfortunately modern machinery has meant that in some cases there is less need for an elephant’s strength and intelligence than before.  Instead they are used as performing street elephants, there to do tricks and entertain people for money or to be fed to by tourists who buy bananas from their keepers.  This was the outcome for many elephants in Thailand who lost their forestry jobs in 1989 when a logging ban was put in place.  They were no longer profitable for their owners who had no other choice but to make them work.  There are also situations in which elephants are used for work in cities and towns.

It is now illegal for elephants to be used in this way in many areas, but the practice still continues.  Street elephants suffer greatly from poor health, with sore feet hitting the hot tarmac instead of soft ground, sunstroke and dehydration due to the lack of shade and gastric and respiratory problems in polluted cities. They are often involved in road traffic accidents too.  The noise and artificial lights combined with their poor health makes them disorientated and unwilling to do tricks, so they often suffer physical abuse from their keepers.  Their eyes may look cloudy due to the drugs they are given to fight their fatigue and keep them going.  There are solutions to this problem but they would need a concerted effort from various parties such as government agencies and NGOs to make them effective, as well as tourists not showing any interest in them.

The poaching of elephants for their tusks still occurs, despite worldwide protection under the Convention on International Trade in Endangered Species (CITES) but more African elephants are killed than Asian as only some Asian males actually have tusks.  However, Asian elephant tusks are regarded as being of better quality.  With fewer males with tusks remaining, more without tusks are mating with the females, which means that the tusk gene is at risk of disappearing.  Since tusks are an important tool for elephants, this will affect their ability to survive in the wild.

The relationship between elephants and humans has become increasingly important as human populations grow and encroach on the elephants' territories.  If the current trend of population growth continues, it could reach 12 billion people by the year 2054.  Already 20% of the world’s population live in or near the range of Asia’s elephants.  Human settlements are breaking up their habitats and cutting them off from other elephants and they are unable to follow their ancient migratory routes.  Smaller herds result in interbreeding and a loss of the genetic diversity they need to ensure their long-term survival.

They are being restricted to smaller and smaller areas where a lack of food leads to a reduction in birth rates.  Forests are cleared to grow food and make space for cash crops such as rubber, tea and palm oil. Confrontations between humans and elephants are on the increase as short of wild food, hungry elephants take to crop raiding.  Crop damage can destroy a small farmer’s livelihood within a very short space of time.

Communities do their best to scare them off with whatever means possible such as fire crackers, trenches and electric fences but these are not very effective, so often a crop raid results in the death of the animal by shooting or poisoning.  In many cases this has replaced poaching as the major cause of Asian elephant mortality.  It has also been known for elephants to attack and destroy fragile villages to satisfy their taste for alcohol, which also can result in people getting killed.  Over 100 people are
killed each year in India by elephants., although about half of these are surprise attacks in the forests.

New methods trialled in Africa is proving successful in limiting the damage caused by elephants by targeting their keen sense of smell which finds the scent of chilli repulsive.  Smearing a chilli tobacco paste on a cotton rope surrounding crops has proved to be an effective deterrent.  Also see the Buzz Off section on the African Elephant factsheet below, for another interesting elephant deterrent!