Where humans have planted crops for food, unless they are organic, poisonous chemicals have been sprayed on them; insecticides are used to kill insect pests and herbicides are used to kill weeds. Fungicides fight off fungal diseases. Artificial fertilizers are added to the soil to increase the yield of the crops. If these chemicals are used in excess, some of them dissolve in rainwater and drain into rivers, streams and ponds, polluting the water and killing the wildlife.

The "weeds" competing with the farmers' crops include wild flowers and many of these have become endangered through the use of herbicides. Insects rely on plants for food and breeding sites so the number of these are affected by a reduction in the number of plants. Many birds depend on insects for food so the numbers of birds may be affected by the use of both insecticides and herbicides. One of the reasons why the Barn Owl is endangered is due to a shortage of insects and it may also be poisoned by eating insects affected by chemical sprays. 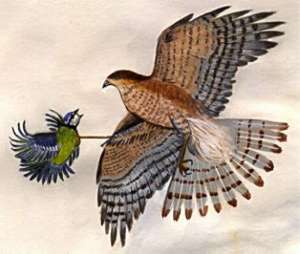 The case of DDT and other chemicals known as organo-chlorines is well known. These were first used extensively in the 1950s, sprayed onto crops to kill insect pests. Unfortunately, after a few years it was noticed that birds of prey were rapidly declining in numbers and thousands of seed-eating birds were dying. By the 1960s the once common sparrow hawk was a rare bird in Britain. The sparrow hawk's prey were the seed-eating birds which were carrying the poisonous insecticides in their bodies. Consequently many sparrow hawks and other birds of prey were being indirectly poisoned by the chemical sprays. The organo-chlorines also caused many birds to lay thin shelled eggs, which cracked easily.

Research showed that the chemicals were entering the food chains and being stored in the fat of the animals' bodies. For example, a thrush may eat snails which have eaten a sprayed cabbage plant. The thrush may not have eaten enough poison to be actually killed but a sparrowhawk eating several thrushes accumulates so much of the poison that it is killed. The chemicals become more concentrated as they travel up the food chain. Even most humans still have small amounts of organo-chlorines in their fatty tissues although these chemicals had been withdrawn from use by 1976. They are still used, however, in some Third World countries. By the 1980s the sparrowhawk population had recovered dramatically and it is once again a common bird.

This example shows just how dangerous the use of chemicals in the environment can be.

As mentioned earlier, some plants are endangered through collectors such as the Venus fly-trap and some tropical orchids, but most threatened plants have become so through the destruction of their habitat. Once very common plants have almost disappeared because of the way humans have changed the land. For example, the Egyptian Papyrus, a type of reed, had been used for thousands of years for all sorts of things such as paper, medicine, boats, baskets, food etc. Then, when changes in the irrigation methods on the river Nile were introduced, this valuable plant almost completely disappeared. It was thought to be extinct until 1968 when a few plants were found in an undisturbed waterway.

Orchids have been also collected from rainforests to become household favourites, causing many species to become endangered.

Read More: Is it Important to Save Animals from Extinction?