Gas is short for ‘natural gas’, an invisible, odourless substance.  It is found underground and is a fossil fuel.  Gas is used as a fuel in our homes, in industry and in the energy sectors to produce electricity, heat buildings, water and cook food.

Natural gas is made up of a mixture of gases but methane is the main ingredient.  Although natural gas itself does not smell, gas companies add a chemical to it that produces an eggy rotten smell so that we can easily sniff out any dangerous gas leaks.

It is said that the Chinese used gas to heat water, transporting it from open wells through the hollow stems of bamboo as long ago as 500 BC.  Yet, it was more than 1500 years before natural gas became a mainstream energy supply.  In 1795 the UK became the first country to commercialise (produce and sell) natural gas.  Confusingly this natural gas was not ‘naturally occuring’, but gas produced from coal.  Initially gas was used only for lighting street lamps, but these were later replaced by more efficient electric lamps.  In 1885 the invention of the infamous Bunsen burner changed the use of gas throughout the world and preceded the development of the infrastructure (pipes, stations and machines) needed to extract, transport and provide gas to homes and businesses across the country. 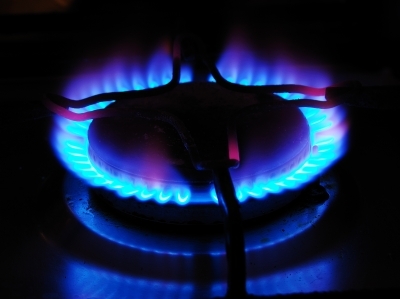 Gas in the home

Homes and workplaces in the UK use gas for many different things.  Some houses have gas hobs and ovens for cooking.  Some heat their house and water using gas boilers.  The benefits of gas are that it burns hot, bright and does not smoke when burnt like other fuels.

Like coal and oil, burning gas to produce electricity produces carbon dioxide and methane emissions - two ‘greenhouse gases’.  However, gas produces considerably less emissions than oil and coal making it a cleaner alternative.  Despite this advantage gas is a non-renewable fossil fuel which means that there is only a limited supply.

In a bid to find and extract more gas from beneath the earth’s surface methods have become increasingly complicated.  The most recent, and controversial, method is hydraulic fracturing, also known as ‘fracking’.  Fracking is the extraction of shale gas from layers of rock and sediment deep underground.  To extract the gas various chemicals and a lot of water are pumped into the ground, squeezing out the gas as it fills up the holes.  Many people are concerned that fracking causes earthquakes and that the chemicals used in the process can leak into our water supplies.

Tara, aged 11 recorded a video for us about the hydraulic fracturing that was going on around her home, you can view it here.