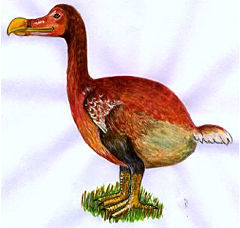 This happens when a species declines in numbers gradually but steadily at the end of its evolutionary period on earth. The length of the period depends largely on the success of the species as a whole and its ability to adjust to changes in climate and vegetation and the appearance of predators or (in the case of predators) the disappearance of prey. It is thought that 90% of all organisms that ever lived on earth are now extinct.  It is worth remembering that a species dying a natural evolutionary death is nearly always replaced by new forms or groups.

Animals may also become extinct through direct exinction.  This includes the hunting and capturing of animals.  Humans have always hunted and killed wildlife but early humans lived more in harmony with nature, they killed animals for essentials like food and clothing.  When guns were invented mass destruction of species was possible.  Animals have been, and still are, killed for meat, clothing,medicines, feathers, eggs, trophies, tourist souvenirs - and sometimes just for amusement.  Some species are still captured in the wild for the live pet trade, even though their numbers are dwindling.

Many of the species now facing imminent extinction do so not because people have set out to destroy them - but rather because they have stepped in the path of their "progress". Of all the causes of indirect extinction the most widespread and devastating must be the destruction of habitat.

Five phases of huge natural extinctions are thought to have occurred over the earth’s history and many think that we may be in a sixth phase as current extinction rates are an estimated 1,000 to 10,000 times higher than the natural rate. This phase is unique in that the causes of these mass extinctions are largely due to the activities of humans.

In summary, the reasons why animals are endangered are due to: hunting, unsustainable fishing methods, loss and fragmentation of habitat and degregation of habitat through pollution, plus climate change is becoming an increasingly important factor.  Invasive species and disease also play their part.

Its hard to tell exactly how many species are becoming extinct when we don’t know exactly how many there were in the first place.  Even a handful of trees in a rainforest eco-system could contain numerous previously unidentified invertebrates. Between 1.4 and 1.8 million species have already been officially identified.  An article in Science Magazine published in January, 2013, estimated that there are two million to eight milliion species.

With the human race multiplying, the destruction of tropical rain forests with the equivalent of
36 football fields of rain forest being destroyed every minute and the probable loss of approximately 800 square miles of wild habitat each day to human needs - it is hardly surprising that there are so many endangered species of animals and plants.

It is interesting to look at the way in which the disappearance of animal species in ever-increasing numbers is related to the steady increase in the size of the world's human population over the past three hundred years. The figures look like this:

By the middle of the century there were about 450 million humans on earth and 7 animal species became extinct.

By 1850 the human population had increased to 900 million and 27 species were lost.

To date there are over 7.2 billion people on earth.  This is set to peak at 9 or 10 billion.  So far approximately 10 animal species have become extinct. Since we only know a small proportion of the species that exist, this number is likely to be much higher.

The International Union for Conservation of Nature

The International Union for Conservation of Nature is a global environmental network which conducts scientific research into biodiversity and eco-systems in order to pass on knowledge and influence those in power to help them develop the best laws and practices for people and planet as well as running thousands of projects around the world.

The IUCN operates the Red List of Threatened Species, an internationally recognised authority on the conservation status of plant and animal species across the globe.  They use a scientific approach to determine numbers of a species and the risks they are under in order to determine how much of a conservation priority they are.  Species and sub-species are placed on a scale which shows how under threat they are.

Extinct - a species is totally extinct
Extinct in the Wild - there may be some species in captivity but none surviving in the wild.  Sometimes successful captive breeding programmes can release species back in to the wild as occurred with Prezwalski’s horse which was reintroduced to Mongolia.

The following three fall under the threatened category:

Over 76,000 species of plants and animals were assessed by April 2015, both threatened and non-threatened. Animal species are covered much more than plants, particularly mammals while other areas such as marine species have not been covered in so much detail.

Suddenly, the word extinction has not one, but several possible definitions depending upon the species being studied or discussed and the reason for its decline or extermination. As teachers will very quickly appreciate, this opens up a wide-ranging subject for class or project work of all kinds, suitable for any level of age or academic ability.

There are many absorbing activities linked with the study of extinction ranging from simple model making and artwork to detailed studies of ecosytems, or deductions concerning climatic changes which brought the Age of Reptiles to a comparatively abrupt end.

Case Histories
An interesting study for both individuals and groups is the compilation of typical case histories showing why plants and animals are endangered or why they have become extinct.

These case histories could include any of the following:

Tiger  (critically endangered - endangered)
Fifty years ago there were more than 100,000 tigers - now there are approximately 3,200 left and the chances of survival are not good.

Passenger pigeon (extinct) A classic example of direct extermination. Countless millions of these birds were killed within 30 years in North America, the last one died in 1914.

Quagga (extinct)
A variety of zebra with stripes at the front of its body.  It lived in large numbers in South Africa until Boer settlers began hunting them.  They were finally wiped out in 1878.

Rhinoceros  (near threatened - critically endangered)
Any of the five species will make an interesting study. In evolutionary decline - being accelerated by poachers who sell horn (which is attributed with magic powers).

Great whales  (least concern - endangered)
Humans' predation on the whales from the earliest times to the present day provides scope for a very detailed and well documented study.

Remember that Humans too can become extinct, and there are already too many records of tribal extinction around the world.

According to Survival International 150 million tribal people live in over 60 countries around the world.  Although their land rights are protected under international law, on a local level this is not the case.  Many tribes are in danger of being wiped out by diseases brought in by outsidersand sometimes suffer violence at their hands, particularly if the tribes do not have contact with the outside world. No one knows for sure how many tribes this includes, but the the best estimate is probably more than 100, mostly in Amazonia and New Guinea. Few remain particularly in the rainforests, where they are vulnerable to the exploits of miners and logging companies.  When tribes are destroyed, so is their language, culture and knowledge which has built up over thousands of years.

What can we do?

The IUCN Red List of Threatened Species (2015), How Many Species are Threatened? [online], Available from: http://www.iucnredlist.org/about/summary-statistics#How_many_threatened [accessed 07/06/2015].

Giller, Geoffrey (2013), Scientific American Are We any closer to knowing how Many Species There are on Earth [online], Available from: http://www.scientificamerican.com/article/are-we-any-closer-to-knowing-how-many-species-there-are-on-earth/ [accessed 07/06/2015].

Holmes, Bob (2013), New Scientist, How many uncontacted tribes are left in the world? [online], Available from: http://www.newscientist.com/article/dn24090-how-many-uncontacted-tribes-are-left-in-the-world.html#.VYe5fPlViko [accessed 07/06/2015].