The fer-de-lance's name means 'spearhead' in French.  It is the most dangerous snake of Central and South America, and causes more human deaths than any other American reptile. 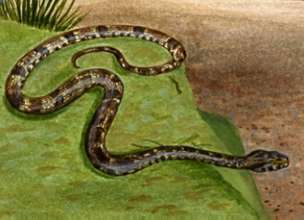 Breeding season: Throughout the year.

The fer-de-lance's name means 'spearhead' in French.  It is the most dangerous snake of Central and South America, and causes more human deaths than any other American reptile. On average, a fer-de-lance injects 105mg of venom in one bite, although a venom yield of up to 310mg has been recorded while milking them. The fatal dose for a human is 50mg.

Hunting
This is mainly done at night, though it will move around at any time and small mammals are the usual prey. When it is about to strike, it rears up, with its head and upper body forming an 'S' shape. It is able to strike so fast that it is nearly impossible to see it move from the 'S' position. It swiftly injects a lethal dose of poison, then retreats to wait for the venom to work. When the prey is dead, the snake locates it by following its scent trail. It can then eat the prey at leisure.

Breeding
After mating, the female retains the young inside her body, moving in and out of the sun to keep the embryos at a constant temperature. The 50-80 live young each measure about 30cm at birth, and are brighter in colour than their parents, with yellow or beige tails. They feed themselves on frogs and lizards, and actively climb trees, but lose this habit in adulthood.

"Fer-de-lance"  meaning 'spear head, is a common name given to the variety of snakes from the genus Bothrops, a group of snakes also known as pit vipers. However, many scientists now restrict the name 'fer-de-lance'  to the Martinican species, Bothrops lanceolatus.

Like other pit vipers Bothrops species have two indentations or 'pits' behind and above the nostrils which can detect a rise or drop in temperature of just 0.001°C, allowing it to detect warm-blooded mammals. These 'pits', coupled with its tongue to 'taste' the air, allow the fer-de-lance to strike with great accuracy even in total darkness.

Bothrops species are able to climb and swim. Their natural habitat is forest, but it is often found on plantations and in run-down houses, as it can find a ready supply of rats and mice there. This unfortunately brings it into contact with humans. It will usually flee if disturbed, but can also defend itself vigorously, striking as soon as an enemy is within reach.