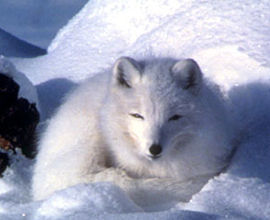 The arctic fox lives in one of the most inhospitable habitats on Earth.

Arctic foxes are usually solitary in the summer but in the winter they hunt and live together in small family groups.

They reach maturity at one year and mate in early April before the summer arrives. They can have large litters from four to fourteen puppies in a litter with an average of six and can have two litters in a year.

The arctic fox is the only species in its genus although they are related to other foxes, wolves and dogs. They are particularly well adapted to the cold habitat that they live in with small, compact bodies that conserve body heat and thick, dense winter fur.

Threats to the Arctic Fox

The Arctic fox has suffered locally, particularly in the south of its range but overall it is quite a common mammal.