Giraffes are sociable creatures, but do not form herds. Instead, they meet in groups each day, but the composition of a group changes from day to day. 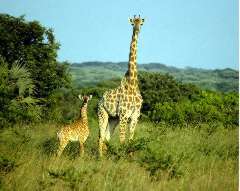 Distribution: Africa, south of the Sahara desert, in open woodland and wooded grassland.

Lifespan: 25 years in the wild.

Call: Usually silent, but can grunt and snort. Calves bleat in distress.

Food: Leaves from trees, shrubs, climbers, vines, and some herbs.

Nine subspecies of giraffe are recognised, all very similar but distinguished by coat pattern and geographical distribution.

Giraffes are sociable creatures, but do not form herds. Instead, they meet in groups each day, but the composition of a group changes from day to day. Males (bulls) in a given area establish a pecking order by neck-wrestling. If a strange bull wanders into the area, it will be challenged by a resident bull, and the two will bang their heads together until one of them retreats. The male's skull is extra strong for this purpose.

Sexual maturity of the female is at 48-60 months, the male is at 42 months. The giraffe mate at any time of the year with the gestation period being between 453 - 464 days. There is usually only one calf, very rarely twins.

A giraffe cow in season attracts males from all around, but is soon won by a dominant bull. He drives off the subordinate bulls by threatening them; fighting is rarely necessary at this stage. A giraffe's pregnancy lasts fifteen months, after which the cow will go to a traditional calving ground used by females time and time again to have her single calf. Giraffe calves are born with horns, which is unusual. The horns lie flat against the baby's skull when it is born, but pop up during the first week of life.

The calving ground ensures that the young calf is always left in a group of young giraffes of about the same age when its mother goes off to feed in the middle of the day. Even so the calves are heavily predated by hyenas, leopards, and wild dogs, and only about half of them will survive their first six months.

As the calf grows older it joins its mother. Lions become its main enemy, but a female giraffe can kill a lion with a well-aimed kick of its front feet. After the calves are a year old, less than one in ten will die in each year.

Weaning takes fifteen months, although a calf's mother will mate again five months after her calf is born. A young female stays in her mother's home range but young males form all-male 'clubs', and wander away when they are about three years old.

Giraffes are browsers, and feed on the leaves and shoots of trees and shrubs. They vary the way in which they gather food depending on what it is they are eating.

Some trees, like the acacia, are very thorny, so the giraffe needs to take care when eating from them. They bite off individual shoots and bunches of leaves between the thorns. A giraffe's tongue can be up to 45cm long, and it uses this to pull leaves into its mouth and coats the whole ball in sticky saliva making it safe to swallow. They can pull the smaller branches of less thorny trees through their lobed canine teeth, stripping them of their leaves.

The way giraffes feed reduces competition between the sexes. Females bend down to reach lower branches of trees and shrubs, whilst males stretch up to get the leaves from the very tops of trees. Giraffe cows feed for up to twelve hours in every twenty-four, but males feed for much less time. Adult giraffes eat about 60kg of leaves every day.

Some African tribes have a tradition of hunting giraffes for food. Tribes in Sudan, Chad, and Ethiopia hunt them on horseback, but the bushmen of Botswana hunt them on foot, creeping up behind them and cutting the tendons in their back legs to prevent them from running away, then spearing them to death.  It has been found that the presence of humans, weakens social relationships of giraffes. Giraffes that live close to human settlements have weaker bonds with other giraffes and fewer interactions with other members of the species.

In 2020, the Giraffe Conservation Foundation estimated the current Africa-wide giraffe population at approximately 111,000 individuals. This is a drop by almost 30%, a slightly less bleak picture than previously portrayed in the 2016 IUCN Red List assessment that estimated giraffe at less than 100,000 individuals. Only the Angolan, Cape and Thornicroft’s giraffe numbers are stable.  The rest of the subspecies are decreasing in number across the continent of Africa.