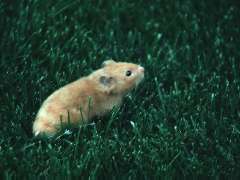 Burrowing; most hamsters live in dry places such as the edges of deserts, but the common hamster lives among crops, in ploughed fields and along river banks, often swimming. When they are not busy searching for food, hamsters are in their underground burrows.

The common and grey hamsters have short shallow burrows for use during the summer and deeper ones for the winter. Each burrow is long and branching with several entrances and a number of compartments for nesting, storing food and for 'toilets' - hamsters being very clean animals. Dwarf hamsters live alongside pikas (small relatives of rabbits and hares), and use their burrows and paths.

Common and golden hamsters are mostly nocturnal; grey hamsters may be seen by day and night during the spring and summer, but are completely nocturnal in the winter.

Hoarding; hamsters are well-known for collecting and storing food in their burrows. Food is collected in the large cheek pouches and carried back to the burrow. A hamster can stuff an amazing amount of food into its pouches and when packed full, the pouches can extend back beyond the level of the shoulder blades. The winter food stores can be enormous; one common hamster's store was found to contain 90kg of cereals, pulses, seeds and root vegetables! Chinese peasants have been known to make a living by digging up the grain stores of grey hamsters.

Hibernating; in the winter, hamsters stay in their burrows, blocking up the entrances with soil. They are not true hibernators but sleep in a grass-lined nest, waking up every five to seven days to feed from the food they stored during the autumn. While hibernating, the pulse rate of the golden hamster drops from 400 per minute to 4, and it takes a breath only twice a minute.

Until 1930, it was assumed that the golden hamster was extinct as a species. Then, in 1930, near the ancient town of Aleppo in Syria, a Jewish archaeologist by the name of Aaron Abrahams, came across a nest containing a small rodent with twelve babies that he could not identify. He carefully placed the family into a container and had them taken to the Hebrew University in Jerusalem. There they were identified as golden hamsters and, under laboratory conditions, encouraged to breed.

As a result, all the golden hamsters kept as pets in the world today are descended from the mother and babies found by accident in Syria back in 1930. It has never again been found in the wild.

Apart from being kept as pets, hamsters have also been popular as laboratory animals. There has been concern that they may escape and become pests, like the common hamster in Europe. They have sometimes formed colonies under the floors of buildings, but generally it is too cold in Europe for hamsters to survive in the wild. Their import is banned in Australia and New Zealand where the climate is warm and dry in parts - perfect for golden hamsters!

The main predators of grey hamsters are mink and stoats. Other hamsters are killed by foxes, birds of prey, domestic dogs and cats. Common hamsters have sometimes been trapped by man for their fur and are considered to be a pest because they dig up root vegetables and eat other crops. Dogs were used to hunt the hamsters, following them by sight.

European hamster numbers have dropped by up to 75% in numbers across the French region of Alsace, in Germany and across Eastern Europe because female hamsters now give birth to fewer babies than they once did. The IUCN says that in the 20th Century, a female hamster would give birth to an average of 20 baby hamsters a year, but this has dropped to only five or six a year.  Experts believe global warming, industrial development, light pollution and plantations may be possible causes of the decline in breeding numbers and that, if nothing is done, European hamsters will go extinct in the next 30 years.

Hamsters are solitary animals and only come together for mating. In the wild, male common and grey hamsters visit the burrows of females and are driven out after mating. In captivity, golden hamsters have to be separated after mating, otherwise the female may kill the male. The gestation period of the common hamster is 19 - 20 days, that of the golden hamster 15 days. Some four to twelve naked and blind young are born in a nest chamber in the burrow. Their eyes open at two weeks old and by this time they have a thick coat of fur. The young hamsters are weaned quickly, at 3 - 4 weeks, and leave their mother shortly after. A mother hamster is very maternal, and, if danger threatens, she will carry her babies away, either by putting them into her cheek pouches or laying them across the toothless area of her jaws. A female hamster may have two or three litters each year.