The brown hare is a larger, more athletic relative of the rabbit. It is able to adapt to a variety of habitats and so is one of the most widely distributed land animals in the world. 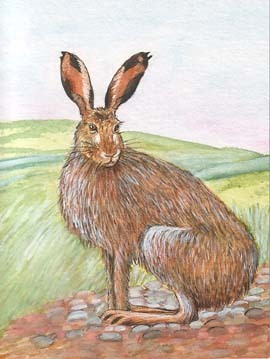 Distribution: widespread over most of Britain, except Ireland (where they have been introduced). Also occur widely in rest of Europe, Asia & Africa. Introduced to Australia, New Zealand, Chile & the USA.

The brown hare is a larger, more athletic relative of the rabbit. It is able to adapt to a variety of habitats and so is one of the most widely distributed land animals in the world. No other British mammal is better able to survive in totally open habitats where it is at the mercy of severe weather conditions and predators.

Unlike the rabbit, the hare is solitary and does not dig burrows, but instead it lives entirely above ground. During the day it rests and sleeps in a form, which it makes by scraping out a shallow depression in the ground, just fitting its body when crouching low. The form may be against a hedge, in short grass, scrub or a ploughed furrow. When lying in its form with ears laid flat, a hare is well-camouflaged.

If disturbed, it lies perfectly still, hoping to escape notice. If an enemy comes too near, however, the hare leaps up and runs away at speed, tail held downwards. It is built for speed, with its long hind legs and sleek body, and can reach 35 miles an hour! Most pursuers are outrun and the hare also outwits them by swerving and running in zig-zag fashion.

The best time to see a hare is in early morning or at dusk, when it is feeding. In between nibbling plants, it frequently sits up to have a good look around. Its keen sense of smell and hearing help it to detect predators. When moving around a field, the hare stays close to the ground with its ears flat along its back. It moves slowly and carefully, so as to remain inconspicuous.

Predators: foxes, stoats, buzzards and owls may all eat leverets but adult hares are usually fast enough to escape from most enemies.

Hares have been hunted by humans for centuries both for meat and sport. They were once very common in pastures and ploughed fields but over recent years their numbers have declined drastically in many areas. Mountain hares are native to the UK, and are now largely restricted to Scotland, but brown hares were, like rabbits, introduced and are estimated to number about 800,000 this is a decline from around 4 million a century ago.

Hares' decline is most likely due to a reduction in suitable habitat because of housing developments and new roads; also farm machinery, such as mowers, killing leverets - and perhaps insecticides too. Another serious threat is the use of herbicides (weedkillers) in crop fields which kill many wild plants the hares need for a nutritional diet.  Since 2019, it has also been discovered that hares in the UK are also at risk from rabbit virus. The rabbit virus is known to have made the leap to European brown hares in countries such as Italy, France, Spain and Australia.

Hares can breed at any time of year, but the main season is between January and October, with most young born between March and September. Spring is the main mating season and this is when 'mad March hares' may be seen, sometimes a whole field of them, dashing about in a demented fashion, leaping in the air, chasing and 'boxing' with each other. The jacks (males) do most of the boxing, either with each other in a struggle for social dominance, or with jills (females) as a prelude to mating. The female tries to defend herself by boxing with the male who can be quite aggressive. He will mate with several females.

After a gestation period (time between mating and birth) of 42 - 44 days, two or three leverets (young hares) are born in a grass-lined nest within a form. Young rabbits are born blind, naked and helpless, but baby hares are born fully furred and with their eyes open. After birth, the mother puts each leveret in its own form, usually in long grass, and visits them once every night, to suckle them. While she is away, the leverets lie low and still, to avoid detection by predators. When the mother is approaching she gives them a low call and their answering calls help her to find them.

The young are independent when about three weeks old but take eight months to reach their adult weight. A female may produce three or four litters a year.

Hares and rabbits eat large quantities of plant material and so their digestive system is specially adapted to cope with this. During the day they produce soft faeces (droppings) which they then eat. This means that the food in these faeces is digested a second time, extracting more nutrition from it. Also, the faeces contain bacteria which help to break down other foods in the stomach. During the night, hard, round faeces are produced.