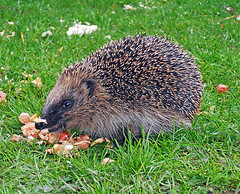 Hedgehogs are in trouble in the UK as reports come in that fewer hedgehogs are seen every year. Recent surveys show that hedgehog numbers
declined by approximately a third between 2002 and
2012 and sightings fell by 4 percent just in 2014. Rough estimates put the hedgehog population in England, Wales and Scotland at about one million, compared with 30 million in the 1950s.