Except when they are breeding, herons spend much of their time alone, feeding in damp places or wading in water. 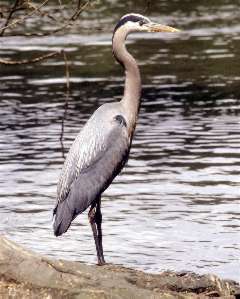 Distribution: All over Great Britain from Ireland across to Europe, Asia, Japan & south to the Mediterranean. Also India and northern China, southern Africa, Indonesia. Birds in northern Europe migrate, wintering south of the Sahara.

Food: Fish, small mammals, amphibians, reptiles, insects, small birds, crabs. The heron is Britain's tallest bird and one of the most easily recognised. Its outline is quite distinctive, whether it is standing motionless at the water's edge or flying, silhouetted against the sky.

Except when they are breeding, herons spend much of their time alone, feeding in damp places or wading in water. Sometimes large numbers of birds can be seen together at a particularly good feeding site. They are wary and suspicious birds, choosing quiet areas to feed.

A heron uses stealth and speed when hunting and will wait, poised and silent, at the water's edge, or stand up to its breast in water, hoping unwary prey will approach. When a victim comes within reach, the heron strikes quickly, stabbing down its long, sharp bill to grab the prey tightly. Fish are swallowed whole, head first so that the spines or fins do not get stuck in the bird's throat. Large fish may be brought to land and broken up into smaller pieces before being eaten. A heron is often difficult to spot when it is resting, head hunched between its shoulders, motionless and silent. If it is alarmed it will suddenly stretch its neck and take to the air, perhaps with a loud, harsh 'fraaank'.

The plumage of a heron may become dirty when it is catching wet and slippery prey. To help clean away the dirt and slime it has a patch of crumbly feathers called 'powder down' on its breast and rump; a specially shaped claw on the third toe is used to comb through the plumage.

Herons nest in colonies, or heronries, usually in the tops of tall trees near water, but in the north of Britain they often choose cliffs, reed-beds or bushes. Nesting begins early in the year and the male defends his own tree-top territory during the breeding season. He threatens any approaching male by straightening his neck, fluffing out the plumes on his head, throat and back and snapping his beak. If the intruder doesn't retreat immediately, he may then lunge at him viciously.

The male calls frequently, day and night, trying to attract a mate. When a female appears, he displays by stretching his beak towards the sky and when she comes closer, he lowers his head over his back and claps his bill repeatedly.

The female usually builds the nest, using sticks and twigs; it is a large structure with a shallow, saucer-shaped hollow in the top. The same nest is used year after year and so it grows in size until it is several feet across. Fresh grass and bracken is added to serve as a lining for the 4 or 5 pale blue eggs. Most eggs are laid at the end of March. Both parents share incubation which starts as soon as the first egg is laid. The newly-hatched chicks are covered in long, blackish-brown down which is bristly on the top of the head and this gives them a comical crest! They are noisy youngsters, keeping up a constant 'agagagagag' call as they beg regurgitated food from both their parents. The eggs hatch at different times, so in years when there is a shortage of food, the biggest chicks survive and the smaller ones starve. In plentiful years the whole brood will be successfully reared.

The adult herons may fly up to 30km from their heronry to visit good hunting areas.

In many countries herons have decreased because they are shot by fishermen and fish farmers. In Britain they are fully protected by law and they are increasing, helped by recent mild winters. The population fluctuates between 4,000 and 4,500 pairs, but it falls after severe winters; the birds may starve when rivers and lakes freeze over.

Herons sometimes visit garden ponds to steal goldfish. They may be deterred from doing this by putting a net over the pond or possibly by placing a model heron at the edge - this is supposed to fool a heron into thinking that the pond already has a resident fisherman!