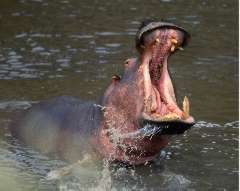 Territory: common hippos live in groups, sometimes known as schools (except for the pygmy hippo which is usually found singly or in pairs). There are 20 - 100 in each group. In the centre of each group's territory there is a creche occupied by females and youngsters; the adult males each have a separate area, known as a refuge, around the creche. The creche is on a sandbar in midstream or on a raised bank of the river or lake. Special paths lead from the males' refuges to the feeding grounds.

The female hippos are the leaders of the schools. When the young males leave the creche, they have to take up a refuge beyond the ring of adult males' refuges lying around the edge of the creche. Each then has to try and win his way to an inner refuge by fighting - and this entitles him to mate with one of the females.

Fights can be very fierce. The hippo's familiar yawn is actually an aggressive gesture, a challenge to fight. The two contestants rear up out of the water, huge mouths wide open, trying to slash each other with their long tusks. Terrible gashes are inflicted but they quickly heal. The aim of a fight is to break a foreleg of an opponent - this is fatal because the animal can no longer walk on land to feed. There are strict rules concerning the behaviour of the males. Outside the breeding season a female may pay a social call on a male and he may visit her - but he must enter the creche with no sign of aggression. If a female gets up on her feet, the male must lie down - and he may only get up when she lies down again! A male who does not keep to these rules is driven out by attacking females.

Daily Life: a hippo spends most of its day basking on a sandbar, or lazing in the water with just its ears, eyes and nostrils, and perhaps its back and top of the head, exposed. It feeds mostly at night, coming on land to eat mainly grass. During one night an individual may wander up to 20 miles but usually does not venture far from water. The areas of grass, kept short by the hippos, are known as hippo lawns.

If frightened, common hippos rush into the water but pygmy hippos prefer to head for the undergrowth. Pygmy hippos are very shy and hard to find. They are usually found singly or in pairs. They are not usually aggressive unless disturbed.

Threats to the Hippopotamus

Common hippo: information collected from 34 African countries suggests that the total population of the common hippo in the whole of Africa is about 125,000 148,000 animals. They are not common in West Africa and the population is split into a number of small groups totalling about 7,000 spread over 19 countries. East Africa has about 70,000 and Southern Africa's total is around 80,000.

Numbers are decreasing in 18 African countries and are stable in only six. In only two countries, Congo and Zambia, are hippo numbers increasing. Populations most at risk are those in West Africa. Many of the groups there contain less than 50 animals each and in order to be relatively free from the risk of extinction, each population should probably number around 500.

The most serious threat to the future of the hippo is loss of habitat. There is usually no shortage of water for daytime retreats, except in times of serious drought, but there are reports of loss of grazing habitat to cultivation.

Hunting for meat, skins or for the trophy trade, occurs in a few countries but is probably not a serious threat.

Hippos do come into conflict with people quite often. Crops are damaged and fishermen kill the hippo because of its attacks on them. As the human population increases, this conflict is likely to become more serious. There is also the possibility that the canine teeth could be used in trade as a substitute for elephant ivory - the species would be at serious risk if this were to happen.

At the moment, the common hippo does not appear to be in danger of extinction but it is important to make sure that all hippo groups are protected to ensure their future survival. It must be remembered that the hippo can be a dangerous animal and any conservation plans have to take into consideration the safety of human populations.

Pygmy hippo: the pygmy hippo occurs mainly in Liberia, where it is widely distributed although it does not occur in large populations anywhere. The numbers are unknown but probably total a few thousand at the most. It is described as 'vulnerable' amongst the threatened animals of the world. Although numbers have probably declined recently there is, as yet, not enough evidence to class it as actually 'endangered'.

Although it is fully protected legally in all countries, the pygmy hippo is hunted for meat throughout its range except, apparently, in Guinea - perhaps it is too hard to find. It is not known for sure whether hunting is a threat to its survival, but with such small, scattered populations any killing is bound to have an effect. The main threat, however, is loss of habitat through forest clearance, particularly in Liberia, and, if the pygmy hippo is to survive, the forests in which it lives should be protected. Fortunately, it does breed well in captivity and there are 350 animals in collections around the world. One day it may be possible to reintroduce captive-bred animals into suitable, protected forests.

When the female hippo is ready to breed she goes out to choose a mate and he must behave in a respectful manner as she enters his refuge.

The baby is born after a gestation period of 210 - 255 days. It is 1m long, 0.5m at the shoulder and weighs 27kg. The birth may take place in the water but normally it is on land, the mother preparing a bed of trampled reeds. 5 minutes after its birth, the baby can walk, run or swim. The mother soon takes her baby for walks on land, not along the usual paths taken when going to the feeding grounds, but all over the place. She teaches it to walk level with her neck, so she can keep an eye on it, and it must stop when she stops. In water the baby must swim level with her shoulder so that she can quickly protect it with her body from any aggressive males. Later, when going to the feeding pastures, she teaches it to walk at heel.

A mother hippo is very strict with her baby and if it is disobedient she punishes it by lashing it with her head, often rolling it over and over. She may even slash it with her tusks. When the baby cowers in submission, its mother stops punishing it and begins to lick and caress it.

If a female leaves the creche for any reason she places her baby in charge of another female who may already be supervising several others. The young hippos play with others of similar age, the females together playing a form of hide-and-seek or rolling over in the water with stiff legs. Young males play similar games but also indulge in mock fights.