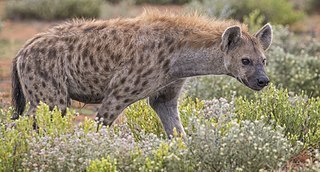 IUCN Status: the brown hyana and striped hyaena are both Near Threatened

Distribution: throughout much of Africa and eastwards through Arabia to India

Life Span: 12 years in captivity up to 25 years in the wild 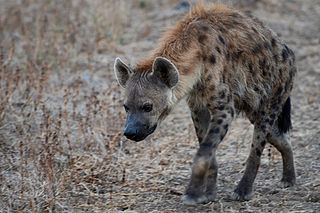 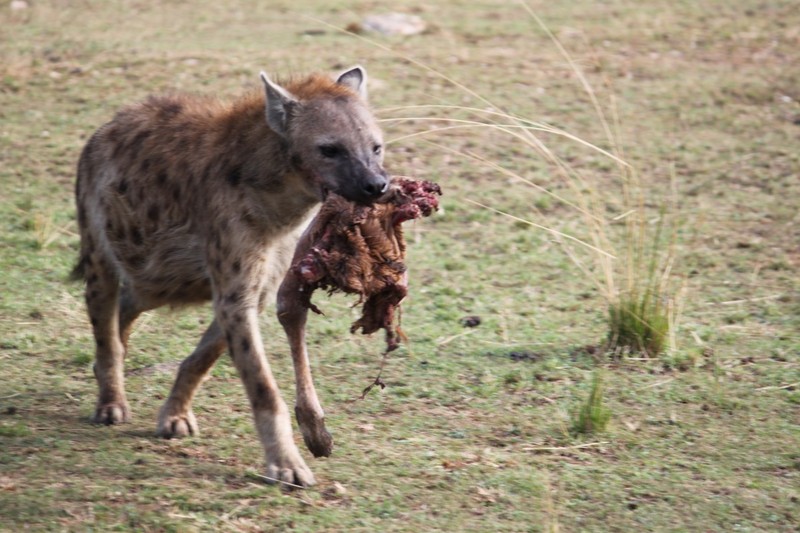 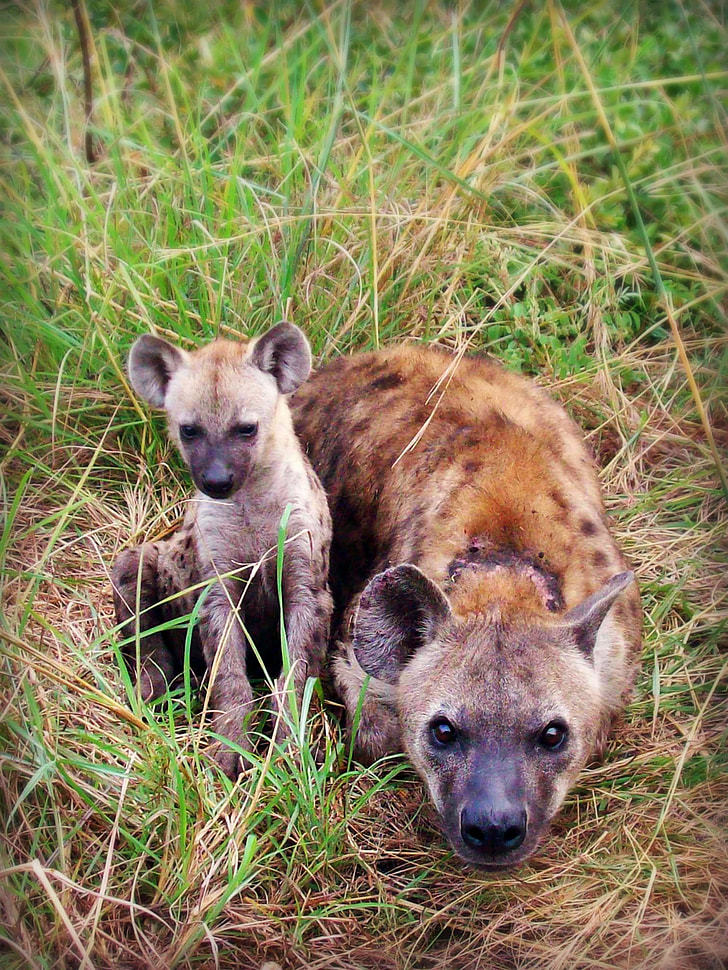 Hyaenas do not pair bond.  When a female is ready to mate, this might be with any pack member she chooses.  Female hyaenas make males who join a pack wait for several years before permitting mating.

Pregnant hyaenas go off alone to give birth and then move their cubs back to the pack’s den once they are around a month old.  The cubs from several females will grow up together in one den and the adults are very protective of the cubs.

Female hyaenas have only two nipples, so they tend to have no more than two cubs per litter.  In the event that they give birth to three, the weakest, least aggressive one usually dies.

Male striped hyaenas help to raise their young by bringing them food, though male spotted hyaenas do not.  This is in part because striped hyaenas are born with their eyes closed and remain helpless for some days, whereas spotted hyaenas are born alert, with their eyes open and their teeth already beginning to break through.  Hyaenas do not develop their bone crushing jaw strength for two or three years, however, so females care for the cubs for longer than many other predators, making sure that they are granted time to feed at a scavenged kill by fighting off other members of the pack.

Known by humans as sneaky and cowardly scavengers, hyaenas do not have the same proud reputation as other predators, such as lions or wolves.  Their scraggy appearance, creepy cackling ‘laughing’ call and reputation for digging up bodies from graves has given them a bad reputation that has been spread through years of folklore.  In Disney’s The Lion King, they are "slobbery, mangy, stupid vultures”.

However, hyaenas actually hunt and kill 95% of the food they eat, scavenging only a small part of their diet.  In fact, biologist George Schaller, studying lions on the Serengeti in the 1960s, discovered that lions scavenged more kills from hyaenas than vice versa.

In normal circumstances, hyaenas will steer well clear of humans during the daytime, though they may gain confidence during the night.  Only striped and spotted hyaenas have ever been known to attack and eat humans, which they have done since prehistoric times.  Human hair has been found in fossilised hyaena dung dating back 257,000 years!  In times of war, hyaenas will scavenge on human remains and it is believed that this has caused them to develop increased hunting behaviours towards living people.  Most attacks on humans have occurred while people are sleeping outdoors.

Hyaenas are used for food and for medicinal purposes in Somalia, though they are considered to be haraam (a non permitted, sinful food) in Islamic beliefs.  The Ancient Greeks and Romans believed that eating different parts of a hyaena’s body would ward off evil and help people fall in love and be more fertile.

Despite their bad reputations, hyaenas are intelligent creatures who exhibit highly social and protective behaviours in their family groups. Researchers have found that individuals have unique personalities.  Furthermore, the hyaena’s scavenging ways serve nature's purpose by helping to dispose of animal bodies.  This not only cleans up the terrain but helps to prevent the spread of insects and disease, making hyaenas vital members of their ecosystems.