Golden jackals usually live in pairs or small family groups and all members of a family unit play a part in defending their territory and hunting. Families hold territories of two to three square kilometres and these are marked with urine to keep away intruders.

Hunting is usually carried out at night, and although golden jackals are good hunters, they do not normally attack large animals. The jackal's body is well-equipped for chasing prey, with its long legs and light build. It also has excellent hearing for detecting movement of prey. Small prey such as rodents, birds and insects are pounced on in a dog-like fashion. When herds of gazelle are giving birth, several newborns are seized by jackals and taken away to be eaten.

Although golden jackals usually kill their own prey, they will sometimes eat carrion, often scavenging left-overs from lion kills. When they spot a lion making a kill, the jackals howl and this attracts other jackals to the scene. When the lions have had their fill, the jackals rush in to eat any remaining meat. If other scavengers, such as hyaenas and vultures, have also arrived, the jackals bury as much meat as they can.

Golden jackals are mainly carnivorous and over half their diet is made up of animal food. However, quite a large amount of plant food is eaten too, mainly fruit. 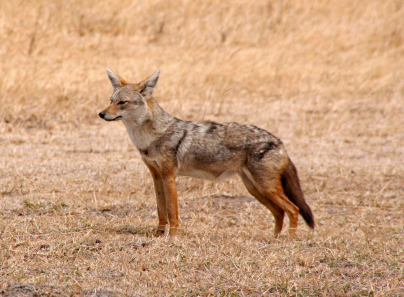 For centuries, golden jackals have made an impression on Middle Eastern civilisations. They feature in many fables, are referred to in the Bible several times, and Anubis, a god of ancient Egypt, was depicted as a man with the head of a jackal.

Jackal pups that have been hand-raised can be quite easily tamed. They may be housebroken and behave rather like a pet dog. However, they will not allow themselves to be petted by strangers.

Golden jackals often scavenge around towns and villages, eating rubbish and dead animals - a habit which is beneficial to the human community. They also eat rodents and rabbits, keeping their numbers down, which helps farmers. However, they also raid crops such as maize, sugarcane and watermelon - not so beneficial to humans! In some areas they attack sheep, and farmers have had to erect jackal-proof fences around their fields.

As they are members of the dog family, it is possible that golden jackals may be involved in the spread of rabies.

Sometimes golden jackals are hunted for their fur. However, being adaptable animals they are still common and, apart from the Simien Jackal, they are at no risk of becoming endangered.

Golden jackals pair for life and the male guards his mate from rivals during the breeding season (October in East Africa, December in Southeast Europe, and all year round in India). A pair of jackals howl together to show that there is a bond between them. They also use different howls to locate one another.

The gestation period (pregnancy) lasts for nine weeks and just before giving birth, the female digs a nursery den. There may be up to nine pups in a litter, but two to four is the usual number. The newly-born pups are covered in soft fur but are blind and helpless for the first few days. Their eyes open after about ten days. For the first three weeks they feed on nothing but their mother's milk and she never leaves them alone. For another five weeks the pups continue to suckle , but also eat regurgitated food - the parents swallow prey they have caught, and when they return to the den the pups like their faces until they regurgitate (bring back) the softened food.

The young begin to take solid food at about three months old, but they rely on their parents for food until they are about five months of age. If one parent dies, the cubs are unlikely to live. However, most pairs are assisted by 'helpers', which are jackals who stay with their parents for a year after reaching sexual maturity (reached at about 11 months), to help look after the next litter. If helpers are present they increase the pups' chances of survival.