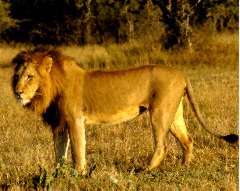 Distribution: Africa, south of the Sahara and the Gir Forest, India

Description: heavy, tawny coloured body. Male has a mane on head, neck and shoulders which varies from tawny to black and maybe thick or thin.

Lions are social animals, unlike most other members of the cat family, living in a pride (family group) with between 20 and 30 members. Some prides have just one male, others up to four. Lions are strongly territorial and will fight off any strange male who tries to enter their territory. Fights can be vicious, often not ending until one lion is dead. The winner takes over dominance of the territory, and the pride. Old or injured lions who have lost their territory often die trying to fend for themselves.

Lions have no natural enemies, apart from humans who have hunted them for centuries. They were once common throughout southern Europe and southern Asia eastwards to northern and central India and over the whole of Africa.

The last lion in Europe died between 80-100AD. By 1884 the only lions left in India were in the Gir forest where only a dozen were left. They were probably extinct elsewhere in southern Asia, for example, in Iran and Iraq, soon after 1884.  Since the beginning of the 20th Century the Gir lions have been protected and their numbers have increased steadily over the years, however, today, there are only about 20,000 left.

Lions have been wiped out in northern Africa. They are extinct in 26 African countries and have vanished from over 95 percent of their historic range. A recent study has found that lion numbers have halved in Central and Western Africa between 1993 and 2015.  In southern Africa, numbers have remained stable or increased in the same time.  Lions only live in the wild in remote areas which have remained undeveloped.  The spread of farming and an increase in the number of human settlements in former lion territories are thought to be the causes of the lions' decline.  However, the trade in bush meat has also had an increasing role by reducing the number of prey animals available for lions to hunt.

Well managed National Parks and game reserves are probably the lion's best hope of survival for the future.

Image: Lion by Tambako The Jaguar

Lion (Panthera leo) populations are declining rapidly across Africa, except in intensively managed areas (2015), Hans Bauer et al. Proceedings of the National Academy of Sciences of the United States of America.

Lions usually hunt at dusk and spend most of the day resting and sleeping. They have excellent eyesight and can see well in the dark. It is usually the lionesses who do the hunting. The lion takes little part in the hunt but he always eats his fill of the kill before the rest of the pride begin their meal - hence the expression 'the lion's share'.

Lions prefer to hunt zebra and wildebeest; these animals are slower and easier to catch than gazelles and small antelopes. The actual hunt is an organised event, some lionesses lying in wait, downwind of the herd they have targeted. Another moves around the herd until she is upwind of it, then she suddenly breaks cover and chases the frightened herd straight towards the hidden lionesses. One animal from the herd, perhaps a slow or injured one, is singled out and killed by dragging it to the ground and biting its neck. When prey is scarce, lions eat almost anything, including fallen fruit and carrion (already dead animals).

Hunger may drive them to attack larger prey - buffalo, giraffe, even rhinoceros, hippopotamus and elephant calves. These are all dangerous animals to interfere with and the lions often get injured. Lions kill only when hungry. Herds sense when lions are out to kill and will often ignore lions wandering close to them.

Lions begin to breed at two years but reach their prime at five years. Mating take place at most times of the year and a male may mate with several females. A lioness has cubs about every two years and gestation is 105 - 112 days. Shortly before birth, she chooses a suitable place for her lair, which ideally should be out of sight from predators, sheltered and close to water.

The number of cubs in a litter is 2 - 5, born blind and with a spotted coat. Their eyes open at 6 days and for the first two months they are dependent on their mother's milk. At six weeks, the cubs begin to accompany their mother to the kill and she teaches them how to hunt. A cub cannot tear meat until it gets permanent teeth at one year, so it continues to rely on its mother for food. By 15 months a cub can kill small prey.

When the cubs reach two years, their mother is usually pregnant again and they have to leave her. Some females may be allowed to stay in the pride, but all the male cubs are driven out by the dominant male. Less than half the young lions will survive their first two or three weeks alone.

Male lions take no interest in the rearing of the young and may sometimes even try to kill them.