Macaws are members of the parrot family which has 340 species. 17 different species of Macaw are found in the rainforests of South America.  Many of them are endangered. 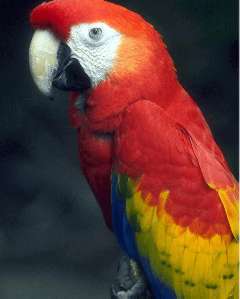 Distribution: throughout much of Central and South America, from Panama to northern tip of Argentina.

Habitat: forests, especially those that grow in swampy ground or along rivers; more open country when searching for food.

Description: rich blue on the crown, nape, back, wings and upperside of tail: golden yellow on the underside of the tail. Large black patch on throat, black bill. White, bare skin on sides of face with wavy lines of small, black feathers.

Size: length of body to tail tip, 85cm. Tail, 50cm. The largest species of macaw is the hyacinth which is 1 metre long from head to tail tip. The red-shouldered macaw is the smallest, measuring 30cm.

Life-span: up to 50 years in captivity

Food: nuts, fruit, seeds, berries. Macaws are members of the parrot family which has 340 species. There are 16 species of macaw at the moment but some of these are close to extinction.

Daily Life: except when breeding, macaws move about in screeching flocks. In the early morning, a screeching chorus begins as birds leave their roosts to gather in a tree. There they bask in the sun before setting off to feed. At midday, when the heat builds up they look for shade. When the sun's rays begin to weaken the birds come out again to feed. At dusk, they return to their assembly point, usually a bare tree, before separating to fly off to their individual roosts for the night. Blue and yellow macaws have been recorded flying as far as 25km to feed.

Although the macaw has such brilliant colours, it is actually very difficult to spot up in the tree canopy, against the golden shafts of sunlight and blue sky. This camouflage gives it some protection against birds of prey.

Threats to the Macaw

In 1492, when Christopher Colombus landed in the New World, there were probably at least seven more macaw species, all living in the West Indies. When the Europeans arrived they began shooting them and catching them for pets. The macaw population declined rapidly and within a few hundred years all the West Indian macaws were extinct. The last one to disappear was the beautiful Cuban macaw, in the middle of the nineteenth century.

Voyages to South America in the fifteenth and sixteenth centuries brought new species of parrots to Europe for trade, including the colourful macaws, and since then they have been in demand as pets. Sadly, the pet trade has had a serious effect on the wild population of all parrots, particularly macaws because of their slow reproduction rates.

On the brink of extinction is the Spix's macaw. In the late 1980s, it was assumed that the beautiful cobalt blue Spix's macaw had become extinct in the wild but an expedition in 1990, to north-east Brazil, reported that one lone male had been spotted! The destruction of the caraiba tree woodland, mainly the result of overgrazing by goats, sheep and cattle, together with the capture of these birds for the pet trade, have reduced the Spix's macaw to this sorry plight.

The last known wild Spix's macaw was seen in 2000, and is now believed to be extinct in the wild though thorough surveys of existing populations in remote areas is yet to verify this.  The Brazilian government has set up a breeding programme with captive birds and hopes to reintroduce this critically endangered parrot and try to make the public aware of the importance of saving the species and its habitat. There are believed to be 90 or so captive Spix's macaws scattered around the world, mostly privately owned. It is hoped that these owners can be persuaded to co-operate in the captive-breeding programme to try and ensure that the species does not become completely extinct.

The future for all parrots depends on the protection of undisturbed rainforests and the end of the capturing of them for the pet trade. Many parrots for sale in pet shops will have been taken from the wild. Never buy a bird unless you can be sure that it is a captive-bred one from a reputable breeder. This will be a happier, healthier and friendlier pet and will help reduce the effect of the pet trade on wild parrot populations.

Image: Macaw by Tambako The Jaguar

Macaws nest in hollows in trees, sometimes high up from the ground. Two eggs are usually laid, which the female incubates for a month. The chicks are blind and naked when they hatch and develop slowly, staying in the nest for 3 months before fledging.

The parents feed the young on regurgitated food and they both defend the nest, showing great aggression towards intruders, screeching loudly and raising their wings above their heads to show the brightly coloured underwings.

Even after fledging, the young macaws may stay in their family group for more than a year. They do not breed until they are 3 or 4 years old and even after then, they may not attempt to breed every year. Pairs usually stay together for life.

Most macaws feed on the fruit of trees, nuts, seeds, fruits and berries. The large macaws can crack even the hard-shelled Brazil nuts with their strong beak, extracting the kernels with the beak and tongue. Macaws can eat unripe seeds and fruits, those with tough shells and spines, or distasteful ones containing poisons - foods that other birds cannot deal with. Some macaws include flowers and nectar in their diet. Many macaws eat clay which they find on exposed river banks. This probably helps them to safely digest poisonous seeds and supplies them with minerals such as calcium and sodium.