Animals do many different and amazing things. Some of them ‘migrate’. This means they travel to other places where the weather is warmer or they can find more food.

Of the mammals that migrate, Caribou (reindeer) undergo the longest overland migration.  Three million of them travel across the Arctic Tundra to find greener pastures and therefore more food. Some cover more than 3,000km each year. 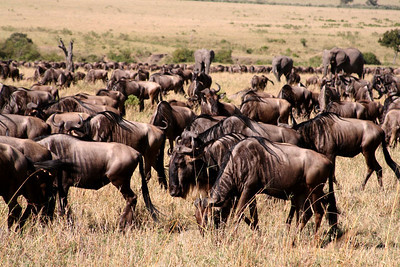 One of the most famous mammal migrations is the great wildebeest migration across the Serengeti in Africa.  Zebra and Thompson’s gazelle also travel with these grunting, horned animals in vast numbers.  The images people remember tend to be the ones where they have to cross big rivers where hungry crocodiles lie in wait to catch the weak and young animals.

The animals move to find better grazing (more grass) and water as the weather becomes drier and the grass stops growing.  They have to move off from their breeding grounds in the Serengeti

when the dry weather approaches early in the year.  No-one knows how they know when to leave and it is never exactly the same time from one year to the next.  But gradually they all begin to move off in their thousands and head north to the wetter Masai Mara over the border in Kenya. Their journey is far from easy.  They have to cross two big rivers during their journey, the Grumeti and the Mara, where enormous hungry crocodiles pick off the exhausted, weak, diseased or young ones.  Finally arriving in the Masai Mara in about July, they remain there until October when they head back to the Serengeti as the rains return there.  As many as 200,000 will die along the way, either from predation, disease, old age or exhaustion.

Many species of whale (which don’t forget are mammals) also migrate vast distances to find food. Baleen whales such as the Grey, Blue, Right, Minke and Humpback whale feed on krill - small, shrimp-like crustaceans with black eyes thatfloat in huge shoals in the world’s in the oceans.  Krill thrives in cool waters so the whales head north in the northern hemisphere and south in the southern hemisphere to feed, and then head back to warmer waters to give birth.

Humpback whales travel from Costa Rica and Hawaii to Antarctica to feed in the krill-rich cooler waters there.  Their young are born in the warmer waters further north in Costa Rica when they return in the autumn.  This journey is more than 8,000km.

Grey whales know where to go by navigating the 16,000 km using the magnetite in their eyes to “read” the Earth’s magnetic field!