Red howler monkeys are thought to be one of the noisiest land animals on the planet! 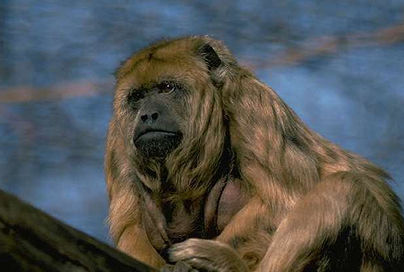 Distribution: From northern Colombia and Venezuela south to the Amazon. From the Andes south to central Bolivia.

Appearance: Red howler monkeys have naked faces, framed by fur, with protruding muzzles and snub noses. They have long, silky, reddish-gold coats and long, muscular tails which are heavily furred except for the underside of the end third, which is naked - an adaptation for gripping branches

Howler monkeys are very sociable and live in groups of 5-40 animals, led by a dominant older male, with several adults and sub-adults in attendance in the larger troops. The dominant male leads the troop's search for food in the forest canopy. They move very slowly, covering only about 400m per day. Howler monkeys are most active in the morning and evening, spending the middle of the day resting and the night asleep in the trees.

From dawn through till dusk, the roars of the howler monkey may be heard reverberating through the forest. The roars can be heard over 3km in the forest and 5km in the open, and are reputed to be the loudest sounds made by any land animal. The roars are made by air which is forced through a special bone in the monkey's throat (the hyoid bone), which amplifies the sound. The calls are thought to announce the presence of a troop to any other troops in the area. This avoids confrontation between groups, which would waste valuable energy. It also spaces troops throughout the forest, meaning that there is less competition between troops for food.

Threats to the red howler monkey: Although it is not an endangered species, it is threatened by the continued destruction of the South American rainforests.

There are 5 species of red howler monkey, living in different regions:

Nuts, seeds, fruits and flowers are important supplements to the howler monkey's diet, 40% of which is made up of green leaves. It has a specially enlarged intestine filled with strong bacteria which help it to digest large amounts of its tough, fibrous food. The howler monkey chooses young tender leaves, together with older ones which contain more nourishment. It can live on leaves alone for several weeks by moving slowly to conserve energy and by feeding selectively. Small animals may also be eaten if they are caught by the monkeys.

Red howler monkeys can breed at any time of year, with both males and females pairing with a number of mates. The female gives birth 140 days after mating to a single baby, which is born fully furred and is able to cling to its mother's belly fur, so that she can still forage with the rest of the troop. As the baby gets older, it climbs onto its mother's back. The baby rides on its mother for at least one year and is not fully weaned until 18-24 months.

Young males are driven out of a troop when they reach sexual maturity. They then search for a new troop to take over. Having taken over a new troop, a male will often kill all the offspring of the previous dominant male to ensure that he does not waste time looking after another monkey's young, and so that only his genes get passed on.