Vervet monkeys have long arms and legs which allow them to move at speed on the ground. 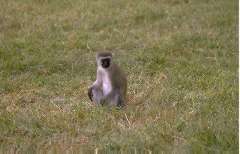 Distribution: Grassland south of the Sahara from Somalia to eastern and southern Africa.

Sexual maturity: 5 years in the wild, 2 years in captivity.

Appearance: Vervet monkeys have long arms and legs which allow them to move at speed on the ground. Their colouring varies even among members of the same troop, but generally they have golden backs, grey limbs, a black face, white underparts and red and blue genitals.

Daily Life: Male vervets are often larger than females, and unusually for monkeys, there may be several adult males in each troop. These will fight each other for control of the troop, and power frequently changes hands as a dominant male leaves the troop or young males reach maturity.

Vervets scent-mark their territory by running their cheeks or chins on rocks or trees. This releases a strong scent from their facial glands which can be sniffed later by other monkeys. Scent-markings are thought to tell other monkeys about territorial boundaries. The size of a territory will vary depending on the availability of food in the area.

Predators: Vervets' natural predators include eagles and snakes, particularly the python, which often waits at the bottom of a tree to ambush an unsuspecting monkey as it climbs down. Pythons are able to swallow vervets whole. Baboons sometimes kill and eat vervet monkeys too.

As crop growing in Africa expands, the monkey's habitat is lost, forcing it to raid crops for food. When it raids crops it is killed by humans. In some national parks elephants cause damage to trees, threatening the vervet's habitat. In spite of these threats, the vervet is not an endangered species.

Vervet monkeys mature slowly, taking around five years to become fertile, although this can vary depending on the available food supply. In an area where the monkeys are well fed, they can become fertile much sooner. Male monkeys probably will not breed at five years old, because it is unlikely that they will be high enough in the troop's social rankings. Generally, they have to wait for several years before they are senior enough to breed.

A single infant is born five to six months after mating. It is fully furred and its eyes are open, and from birth it is able to cling to its mother's belly fur, though she will usually support it with her arm during the first few hours. The young vervet suckles less and less as it grows, though it is still nursed by its mother, and is weaned and almost independent in just under a year, before the birth of her next baby.

Older vervets are allowed to look after the young when they are a few months old. This teaches them how to look after their own young when it is their turn to breed. Females often stay with their mothers for as long as they live, but males leave their family at about five years of age to join other troops and to start to breed.

Vervets have a very mixed diet, although their favourite food is fruit. They will also eat flowers and leaves, crops from farmsteads, and even insects, eggs and small rodents. They collect food using their hands, and the young are taught what foods to pick and how to prepare them for eating by their mothers. Vervets also make regular evening trips to a water-hole to drink. The monkeys are also accidental gardeners. They eat seeds whole, and they pass undigested through them and into their droppings, which are left in ideal places for germination, increasing the abundance of trees.