The wood mouse, also known as the long-tailed field mouse, though rarely seen as it is nocturnal, is probably Britain's most numerous mammal.

Territory
The wood mouse normally spends its life within an area of about 180m in diameter. A male mouse usually forages nightly over an area about half the size of a football pitch. A mouse digs its own system of burrows where it makes an area for storing food and a nesting chamber for the young. Several adults may live together in the same network of tunnels which have two open entrances. Others are blocked with leaves, twigs, soil and stones.

Daily Life
Wood mice spend the day resting in their burrows and emerge at night to forage for food. They are very active, running and leaping kangaroo-like on their large hind feet. They climb well too and often use places such as an old bird's nest high on a tree branch to feed on berries they have collected. Most wood mice stay in the same general area but may travel a quarter of a mile (400m) in one night. They will venture into open spaces where other small mammals will rarely go.

Food
The wood mouse has quite a varied diet but it is mainly vegetarian, eating seeds, seedlings, nuts, fruits and buds. When these are scarce, it will also eat snails, earthworms and insects. It is a great hoarder of seeds and nuts and packs full its underground chambers with a supply to help it survive the winter.

Winter
In very cold weather wood mice sometimes go into a torpid state - almost like hibernation - and in this way they use less energy than usual, enabling them to survive food shortages. At the end of the winter, the population is at its lowest, but numbers soon begin to build up as breeding starts.

Predators
The wood mouse is an important source of food for many nocturnal animals, so it is a wary little creature and prefers dark, moonless nights, using its large eyes and ears for finding its way about. It is the main prey of the tawny owl but the fox, weasel, stoat, badger and domestic cat will also eat it. 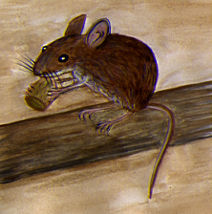 Distribution: throughout the British Isles and Europe, except for northern Scandinavia, Finland and north-western USSR.

Life-span: usually up to a year; rarely more than two years.

The wood mouse, also known as the long-tailed field mouse, though rarely seen as it is nocturnal, is probably Britain's most numerous mammal. A close relative of the wood mouse is the yellow-necked mouse (Apodemus flavicollis) which looks like a large, sandy-coloured wood mouse with a distinct yellow collar; it occurs only in the south of Britain & Wales and is much rarer than the wood mouse.

Wood mice often live in gardens, in or near sheds and outbuildings and are sometimes mistaken for house mice. However, unlike house mice, wood mice do not smell strongly and they have larger eyes, ears and hind feet than house mice. Many people regard the wood mouse as a pest since it can do serious damage on agricultural land, digging up crop seeds and eating crop seedlings. Gardeners are not too keen on wood mice digging up their seeds either! Their sense of smell is so acute, they can sniff out the exact position of each seed in a row of newly-planted peas or beans. They dig directly down to the seeds rather than dig around at random.

Mating begins in March and continues through into the autumn, even into the winter if it is mild enough and there is plenty of food. After a gestation period (the time between mating and birth) of about 4 weeks, the female gives birth to 4 - 7 naked and blind young. She may produce 4 litters a year, although it is normally two or three. The babies are born into a nest chamber, deep in the burrow, which is lined with leaves, moss and grass. They open their eyes at 6 days old and by then they will have a full coat of fur, darker than that of the adult. After 3 weeks, the mother forces her youngsters out of the nest and they are then on their own. Many do not live for more than 3 - 4 months and the overall population has an annual variation, the greatest number being in the early autumn, the lowest in the early spring.