Nestbox building is a good activity for the autumn, ready for occupation (hopefully!) the following spring. 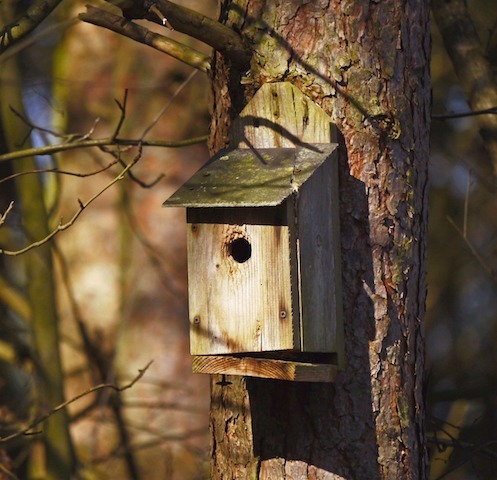 Nestbox building is a good activity for the autumn, ready for occupation (hopefully!) the following spring. In some areas, birds have difficulty in finding suitable natural nesting sites and well-placed nestboxes can lead to an increase in the bird population in your garden or school grounds. They give not only a lot of enjoyment through watching the day to day life of the birds but also valuable practise in observation and recording.

Before tackling the construction of nestboxes with children it is a good policy to discuss the requirements of the birds and the following points should be covered during the discussion:

Details are given overleaf for the construction of two simple nest boxes, one for small hole nesters e.g. blue tits, and another for those small birds preferring a box with an open front e.g. robins. The dimensions given are in centimetres; the wood can be any untreated soft-wood, but may be improved aesthetically by finishing with bark panels. If the diagrams are followed you will find that no joints are necessary and that the wood can simply be butted and screwed or nailed together. The hole is at the front where it is protected by the overhanging roof. If you want to attract a particular species, the size of the hole is important. Only blue tits will be able to use a box with a hole 30mm in diameter. Great tits will most likely take over a box with a hole 35mm in diameter. Holes 50mm and more invite sparrows and starlings.

Both types of nestboxes are best attached to a wall rather than a tree. Predators are more likely to be able to climb or land in trees. On a wall, the only predator that is still a threat is the magpie. Make sure there isn’t a convenient perch nearby and give the box a generous overhang. Squirrels will try and widen the hole in a nestbox of they get the opportunity – a metal plate around the hole will prevent them doing this. Nuthatches seem to like boxes with large holes so that they can reduce the size by plastering a ring of mud around the opening.

Many nestboxes in schools are poorly sited, mainly because the first consideration has been for a ‘good view’. However, where nestboxes are sited in relatively exposed positions they should be placed in the sector north to south-east. This avoids strongest sun – birds can keep their young warm but find it almost impossible to keep them cool – and the wettest winds which come from the north-west an south-west. Generally. The smaller species do not show any preference for height, so consideration should be given to the ease of inspection and avoidance of predators. If it is not easy to get above the box to look in, a mirror mounted on a long handle should give you the inside story!

If you have a class if 30 children all wishing to make their own boxes some thought will have to be given to their density. If you are happy to attract starlings and sparrows which breed colonially there is no problem – just set them up as a terrace or block of flats. If, however, the aim is to attract a wider variety of species, including the much more territorial great and blue tits, a density of 5 – 10 per hectare is recommended.

Finally, a word about nestbox manners; the main point to stress is that the bird, its nest and young come first – the frequency and times of visiting should take this into account. Nevertheless the majority of nestbox species are quite tolerant of a careful approach by humans at regular intervals. There are three particularly critical times during the breeding cycle at which disturbance should be kept to a minimum:-

1. During nest building – Observation on the material and frequency of visit can be made from a distance.
2. Hatching – The danger of desertion is high at this time with most small birds.
3. Fledging – Great care should be made to avoid disturbing well developed young, as premature departure form the nest could spell disaster.