Snails and slugs are distant relatives of the octopus, a creature that is so intelligent it is the only invertebrate that is recognised as sentient in the Cambridge 2012 Declaration of Consciousness. 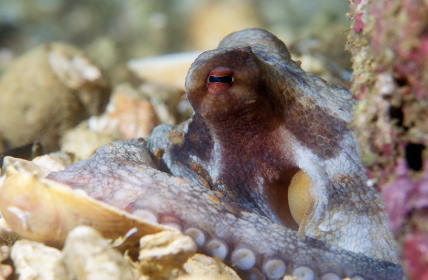 The octopus hunts at dusk. Crabs, crayfish and bivalve molluscs (two-shelled molluscs such as cockles) are preferred, although it will eat almost anything it can catch. It is able to change colour to blend in with its surroundings, and is able to jump upon any unwary prey that strays across its path. The prey is paralysed by a nerve poison, which the octopus secretes, and the octopus is able to grasp its prey using its powerful tentacles with their two rows of suckers. If the victim is a shelled mollusc, the octopus uses its small teeth to punch a hole in the shell before sucking out the fleshy contents.

If the octopus is trying to tackle a more dangerous opponent, such as a lobster, it first squirts ink into the water to create a smoke screen and confuse the lobster. Then it creeps upon the lobster and seizes it from behind using its tentacles.

Dolphins, sharks, moray and conger eels will all feed on octopuses. But the octopus has a number of clever ways to defend itself from attack.

The octopus swims head-first, and in times of danger can expel water through the end of its mantle, propelling it like a jet through the water. It can squeeze its body through tiny gaps to shake off predators.

Magically, it is able to 'disappear' in order to escape detection. It does this by changing the colour of its skin to blend perfectly with its surroundings. By concentrating and diluting the coloured pigments in its skin, it can even produce stripes or strange patterns which seem to change its shape.

Finally, it can squirt ink into the water to hide itself, in the same way that it does when hunting for food. At the same time it releases a substance which numbs the attacker's sense of smell, so that the octopus can escape undetected. If at any time the octopus damages a tentacle during a fight, it is able to quickly grow a new one!

The common octopus is edible and in many areas of the world, they are considered a delicacy. Of the estimated 350,000 tonnes of octopus caught each year,  two-thirds goes to Asian countries such as Japan and South Korea, with a whole third of the global catch going to China. European countries such as Spain and Italy are also big octopus importers.

To meet this growing demand, octopus farms have now been set up, but these raise their own issues of ethics. It has long been known that octopus are one of the most intelligent creatures in the ocean. They can recognise individual human faces, solve problems and remember the solution for months. Whilst it can be argued that farming any animal is unethical, to do so with animals of such intelligence, is arguably extremely problematic.

The octopus lives in a hole or rock crevice in shallow water. Sometimes digs nest in gravel, or uses tentacles to construct a "fortress" out of rocks on the sea bed. These can often be identified by piles of discarded shells lying in the entrance.

If you ever see two octopuses apparently holding hands, it probably means that they are mating. The male pumps spermatophores down a specially modified tentacle called the hectocotylus to fertilise the female's eggs.

This can take up to an hour. For about a week afterwards, the female lays clusters of up to 200,000 grape-like eggs inside her nest. She then guards them for four to eight weeks, depending on water temperature, continually touching and cleaning them as she circulates fresh water over them. The eggs hatch into larvae, which look like tiny adults, but which are only 3mm in length. These float in the sea with plankton before coming to rest on the seabed. They grow to maturity in about two years. In the meantime, their mother may well have died from exhaustion, as many female octopuses never recover their strength after going six weeks without food whilst guarding their eggs.