Some sea fish live in the upper parts of the water. They are called ‘pelagic’ fish, and are caught by drift netting. This is where a net suspended from floats is stretched between two boats so that fish swim into it. Fish are unable to swim backwards, so once they are caught in the net, there is no escape unless they are small enough to fit through the net’s mesh. 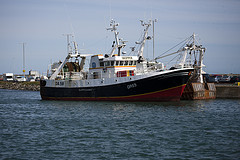 Fish which live lower down – mid-water and bottom-feeders – are caught by trawling, which involves dragging a large net through the water, catching whatever happens to be in the way. The size of the net holes is again very important, and it is vital for the conservation of fish stocks that nets with a very small mesh are banned, as these catch young fish before they have even had a chance to breed.

Read More: The ‘Cod War’ and Other Overfishing Incidents