It used to be a matter of luck whether fishermen would catch any fish at all, as fish are difficult to find, but now modern radar technology has allowed them to be located much more precisely than was possible before.

In Peru, anchovies were fished in huge numbers.  In 1970, over 12 million tonnes of fish were harvested.  However, by 1972, anchovy population had plummeted and less than 2 million tonnes were caught.  It took the population over two decades to recover. 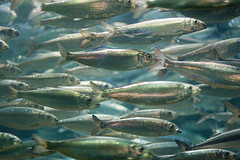 On the Dogger Bank, off the east coast of England near Great Yarmouth, overfishing caused the annual catch of herring to fall 30-fold in just 15 years. By 1966, only 10,000 tonnes of the fish were caught in the whole year. Further north, a ban was placed on herring fishing, and in 1977, a total ban was placed on herring fishing, throughout the North Sea. The ban lasted for six years. According to the IUCN, after the severe drop in numbers in the 1970s herring have recovered and are now classified as Least Concern.

These are just a few examples of how overfishing can seriously affect not only the fish populations, but also the livelihoods of many people who depend on fishing as a job. There is a delicate balance to be struck between catching large numbers of fish so as to make more money and ensuring that there are enough fish left alive to be able to replenish populations for future years. The temptation is to make as much money as possible, but this has to be weighed against the economic hardship that whole communities have suffered as a result of overexploiting their own fisheries, not to mention the grave consequences of overfishing for fish populations.  See our Biodiversity factsheet to find out about how everything is connected in nature.

Read More: The Effects of Overfishing on Other Wildlife