Tuna are very large fish that can grow up to half a ton or more and swim at fast speeds of 50mph.  They are big sturdy creatures with plenty of meat on them which is sadly the reason for their decline. 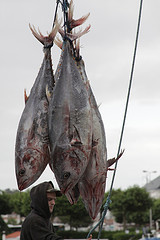 World catches of tuna have doubled in the last decade.  Skipjack tuna, which is currently not at risk, is the most commonly used canned tuna, although yellowfin and albacore tuna are also used.  At particular risk is the bluefin tuna, a slow breeder.  The International Seafood Sustainability Foundation published a tuna stock status update in 2015
stating that bluefin tuna is heavily overfished and that the biomass is at historically low levels. Bluefin tuna is considered one of the most delicious in the world, and despite many campaigns worldwide to boycott the production, consumption and serving in restuarants of this fish, people's taste buds just can't say no.

There are two types of bluefin, the Atlantic/northern and the southern bluefin which is ranked on the IUCN Red List as critically endangered.  In November 2014 the tuna subspecies Pacific bluefin was moved from Least Concern, to Vulnerable on the IUCN's Red List of endangered species.  A worrying sign for the world's tuna populations.

It is considered a delicacy in Japan and China where it is thought to be the best fish for sushi and is exported to many other parts of the world.  According to the IUCN, the International Commission for Conservation of Atlantic Tuna (ICCAT) adopted a resolution stating that the total annual commercial catch in 2014 should not exceed 5,000 metric tons, but countries with historical EPO catches of bluefin tuna may catch an additional 500 metric tons of Pacific bluefin tuna. This figure is still most likely exceeded with the actual amount being caught at an estimated 60,000 tons each year. The World Wildlife Fund (WWF) has called for a quota of 6,000 tons per year.

The fishing season for Atlantic bluefin tuna is May and June when they swim to the Mediterranean sea to spawn.  It is suspected that quotas are often ignored and the true catch not reported. In 2010 the European Commision (EC) closed the fishing season one week early in order to preserve remaining stocks.  Bigeye tuna is the next best alternative to bluefin tuna and is also noted as a vulnerable species. In 2012 it was reported that due to warming sea temperatures bluefin tuna were now also found off the coasts of the UK!  See the section, Changing Seas for more information and to find out what other creatures this change in climate is bringing.

Japan consumes 1/4 of the world’s tuna and one bluefin tuna was sold there in 2012 for a whopping £472,125. Such is the overwhelming desire for bluefin tuna, scientists in Tokyo are researching a stem cell project to use mackerel as surrogate mothers for baby tuna - a way around tuna's slow breeding and maturity process.