Of the five species of owl which breed in Britain the barn owl is becoming much less common generally - and in some places, rare. A recent report suggested that there might be between 4,000 - 5,000 pairs of barn owls living in the British Isles. 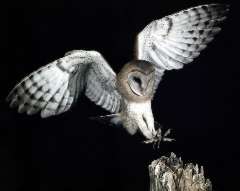 Distribution: The barn owl is one of the most common owls found worldwide but here in the UK their numbers are dropping fast. 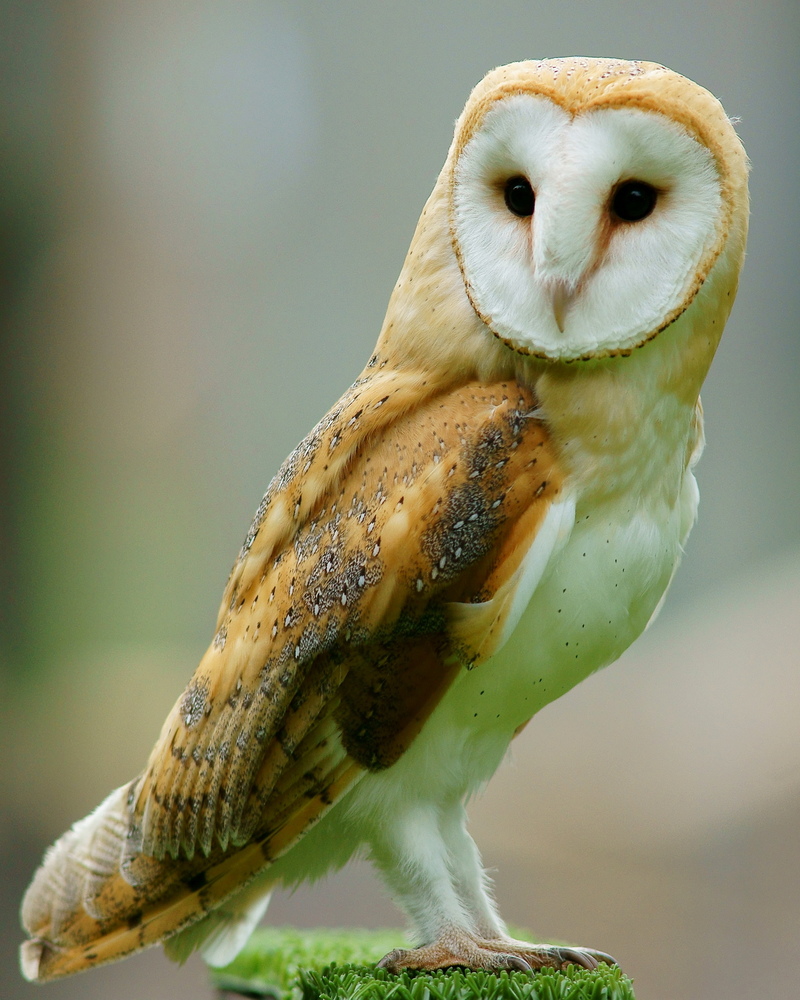 In appearance the barn owl is very distinctive. It has a body length of up to 36cm (14") and has handsome buff-coloured plumage mottled with grey on the upper parts of the body and wings. The heart-shaped head and the underparts of the barn owl are white. Barn owls replace their feathers in order to remain sleek and manoeuvrable in flight. They do this through moulting, a process which takes place over a period of two to three years.

Barn owls have large eyes and, as with all owls, the head can be turned 180 to permit the bird to look directly backwards.

The barn owl is generally nocturnal, though it can sometimes be seen hunting during the day, or the early evening.  It hunts by flying slowly, then hovering over a patch of ground that it believes may conceal prey. It may also find a tree or post to use as a lookout point so that it can scan for food. When it spots its prey, the barn owl can swoop down to grab the creature using its talons. Barn owls hunt over open fields, generally within a range of a kilometre from their roosting or nesting site. As well as its good eyesight, the barn owl has extremely sensitive hearing, to help it hunt.

It is possible to determine the diet of a barn owl by studying its pellets, the parts of the prey that cannot be digested and are, instead, regurgitated.  The preferred diet of a barn owl in the UK is small mammals such as voles and shrews. However, in other parts of the world, barn owls may eat a range of insects, amphibians and lizards. They will also eat smaller birds and bats.

Smaller prey is usually torn into chunks by the owl and then eaten completely, including bones and fur, whilst larger prey might be dismembered and unwanted parts discarded. Studies show that a barn owl will eat at least one vole a night, roughly 23% of its own bodyweight. Extra prey is sometimes stashed away at the roosting site to be eaten at times when food is scarce.

Barn owls consume huge numbers of the rodents that are often considered a pest by humans, making them one of the most economically valuable wild animals for farmers.

The barn owl is, or was, a typical farm-dweller, roosting as its name implies in the timbers of old barns and outbuildings. The species also roosts in church towers, lofts and hollow trees, especially elm.

Breeding may start as early as February or March, with up to seven eggs being laid in a clutch depending on the availability of food.  Barn owls have relatively large broods and the chicks have a fast growth rate.  The eggs hatch in about four weeks, during which time the male feeds the female on the nest. Baby owls can fly by the time they are ten weeks old. However, the chicks have relatively low probability of surviving into adulthood. 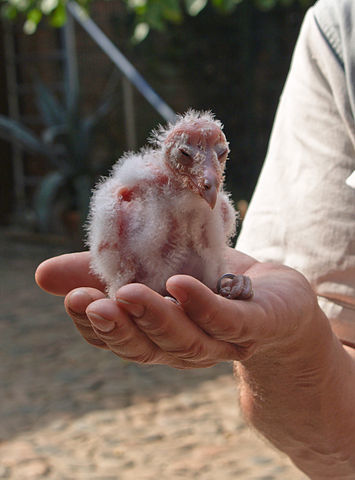 Although Barn owls can live for over 20 years in captivity, the risks to wild birds mean that only two thirds to three quarters of all adult barn owls in the UK survive from one year to the next. Their average life expectancy overall is only 4 years.

This barn owl chick is only 10 days old!

Threats to the Barn Owl

Of the five species of owl which breed in Britain the Barn owl is becoming much less common generally - and in some places, rare.  According to the Barn Owl Trust there are certainly less than 4,000 pairs of barn owls living in the British Isles. This is fewer than half the number resident here just fifty years ago, although great efforts are now being made to protect the species.

The decline of the barn owl and the increasing threat to its future survival can be traced to several causes. Probably the most serious problem for the species is finding a suitable nesting site, as many of the old type barn buildings have been replaced by modern structures which do not offer the same opportunities for nesting. Modern churches too leave a great deal to be desired from the owl's point of view, while the elm tree so favoured by barn owls is itself a threatened species thanks to Dutch Elm disease.

The Barn Owl Trust carries out annual surveys on nests to help get a picture of barn owl populations across the UK. The results can be very variable. 2013 was not a good year for barn owls. Nesting occupancy was 43% below average and brood sizes no higher than normal, but 2014 was a very good year, and the number of nesting pairs was 16% above average. In 2016, however, the number of nesting pairs was down 6% on the all-year average, and the number of young in the nest was down 7%.

Some barn owls are illegally taken and sold to collectors even though the species is protected under the Wildlife and Countryside Act.  Egg collectors too are a serious threat. They raid barn owls' nests and steal eggs either for their own collection or to sell to others. The taking of eggs is also against the law.

Many barn owls die each year as a result of swooping low and flying into oncoming traffic and others consume rodents which have eaten poison, which can cause the owl’s embryos to die inside the eggs.

Many farmers have provided owl 'windows' in new barns in an effort to encourage nesting by barn owls. This is the kind of action that will help save the species in Britain, so we can hope that many more farmers and landowners will become involved in the campaign to save the barn owl while there is still time to achieve success.