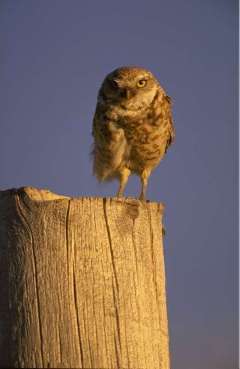 This owl is not strictly nocturnal and is often active during the day (diurnal) and can often be seen perched on fence posts or telegraph poles. If approached it will bob up and down nervously, waggling its head. Sometimes it will be attacked by hordes of other birds, who are not deceived by its small size, recognising it as a fierce predator.

Hunting is carried out mainly at dawn and dusk. The most frequent prey includes beetles, caterpillars, moths, spiders, slugs, mice and voles. Being a fierce, daring bird, equipped with powerful talons, it will tackle mammals and birds of its own size.

The little owl used to be held responsible for the destruction of eggs and young game birds, but analysis of the contents of their pellets proved that this was untrue. Nowadays it is regarded as a useful pest-destroyer in gardens and on farmland.

As with many other animals of all kinds, the little owl population in Britain began to decrease back in the 1960s when organochlorine pesticides were introduced. These dangerous chemicals entered food chains and affected the fertility of predatory animals at the top of the chains, thus reducing their numbers. Since these pesticides were banned, little owl numbers have recovered to some extent and today it is not under any particular threat.  There are an estimated 5,700 breeding pairs in the UK.

During the breeding season, throughout the summer, a pair of owls may be heard calling to each other with a mewing sound. A hollow or crevice in an old tree is usually chosen as a nesting site, but walls of old buildings, rabbit holes and old nests of other hole-nesting birds may also be used.  Once established, a nest site is often used year after year. No special nesting material is collected.

Three to five smooth white eggs are laid and the female usually begins incubating as soon as the first egg is laid, which means there is normally an age difference of a few days between each fledgling. Sometimes the female does not begin incubating until her clutch is complete. Hatching occurs after 24 to 25 days and the fledglings are covered with a creamy down which later changes to reddish-grey. The young owls are ready to leave the nest in three and a half weeks, but their parents continue to feed them for some time.